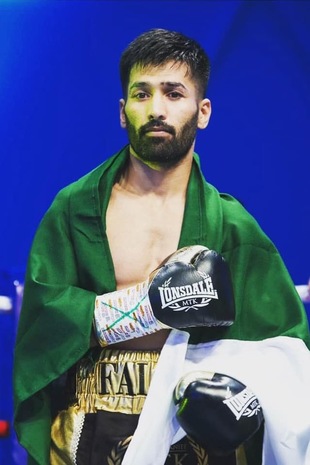 1. He has represented Pakistan at the 2010 Commonwealth Games in New Delhi, India when he won bronze.
2. Muhammad Waseem Baloch was given the bronze medal in Kings Cup, Bangkok, Thailand 2009.
3. At the 2010 Asian Games defeated Iran's Masoud Rigi in the round of 32.
4. He stood the winner of the gold medal in World Combat Games 2010 China.
5. In the 24th International AHMET CÖMERT Boxing Tournament, Waseem won the bronze medal in Istanbul, Turkey, 2010.
6. Muhammad Waseem Baloch was awarded the silver medal in 11th South Asian Games, Dhaka Bangladesh, 2010.
7. Muhammad Waseem Baloch was awarded the bronze medal in 21st President Cup – Jakarta, Indonesia 2011.
8. Muhammad Waseem Baloch was awarded the Gold Medal in 2nd Shaheed Benazir Bhutto International Boxing Tournament, Islamabad, 2011.
9. Muhammad Waseem represented Pakistan in 2014 Commonwealth Games in Glasgow, Scotland where he became the Silver Medalist.
10. Waseem won the bronze medal at the 2014 Asian Games.
PROFESSIONAL BOXING CAREER
Muhammad Waseem turned professional in June 2015 and signed the contract with Korean Promoter Andy Kim at AK Promotion. In his first professional fight, he won the vacant South Korea bantamweight title.
He also won his second professional fight at the Myoung Boxing World in Seoul, South Korea. In July 2016, Waseem made history by becoming the first Pakistani to win the WBC Silver flyweight title. Waseem made his first defence of his WBC Silver title on 27 November 2016 at the Gwanakgu Hall in Seoul where he successfully defended it by unanimous decision win.
After becoming the number 1 mandatory for the WBC flyweight title, Waseem competed in a 6 round non-title fight on 5 July, 2017 in Panama where he registered fourth knockout win of his professional career. Waseem fought for the second time in the space of a month on July 29 at the Gimnasio Municipal in Puerto Armuelles, Panama and knocked out Ivan Trejos (7-7-2, 1 KO) in the third round of a scheduled 8 round fight.
Waseem next fought on 30 September, once again in Panama against Jose Luis Calvo where the fight ended in Waseem being victorious, retaining his number 1 position in the WBC rankings.
In April 2018, it was reported that Waseem would fight former IBF world champion Moruti Mthalane (35-2, 24 KOs) on the Manny Pacquiao vs. Lucas Mattyhsse undercard on 15 July in Kuala Lumpur, Malaysia for the vacant IBF flyweight title. The fight was originally scheduled to be an eliminator, until Donnie Nietes vacated on 11 April in order to make a full move to super flyweight.
However, Waseem lost to Mthalane via unanimous decision thus failing to capture his first world title. This has been his only loss of entire professional career.
Thus the Pakistani boxer, Waseem, holds an incredible professional record of total nine fights with only a single loss while winning seven of bouts through KOs and one via stoppage, and now has stepped up to fight against former World Boxing Championship-Light flyweight Champion, Ganigan Lopez of Mexico this time, who owns the record of 36-9 after 45 professional fights.


Muhammad Waseem is a Pakistani professional boxer who is well known for his quick and swift style of boxing and is nicknamed "Falcon".

Muhammad Waseem was born on 29 August 1987, in the city of Quetta in the province of Balochistan, Pakistan, as one of six brothers to a Pakistani father who was a civil servant, and a Pakistani mother.