Balochistan won the winner trophy in the senior class and Sindh team won the runner-up trophy. 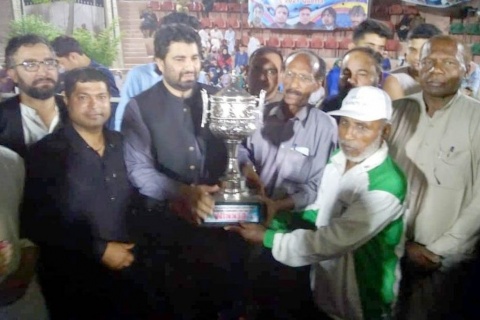 The present government will provide all possible assistance to the youth in the field of education as well as sports, Qasim Suri said.

In the finals, of Sindh-Balochistan Shaheed Zahir Shah Boxing Tournament, Balochistan won the winner trophy in the senior class and Sindh team won the runner-up trophy.

In the women's finals, Sindh won the winner's trophy while Balochistan won the runner-up trophy.

The four-day tournament was held at Ayub Stadium Boxing Arena in Quetta. A total of 254 male and female boxers participated in the tournament.

Deputy Speaker National Assembly Qasim Suri graced the ceremony as chief guest in the finals. Speaking at the end of the competition, he said that it was a matter of great pleasure that the Balochistan Boxing Association organized a splendid tournament in which teams from Sindh and Balochistan took part.

With such a program, the young generation will play its full role against drugs. He thanked the Sindh team and said that by participating in these competitions, they have enhanced the prestige of the tournament. He said that in the world of boxing. Lyari is a big name, the world Olympic and international boxers made the country and the nation famous, he said, adding that the government will continue to encourage sports programs.

In the men's event, Ajmal Pathan, Zakir Hussain and Rafiullah were in the Balochistan team while Zohaib Rasheed and Umar Khan were in Sindh. National boxers participated.