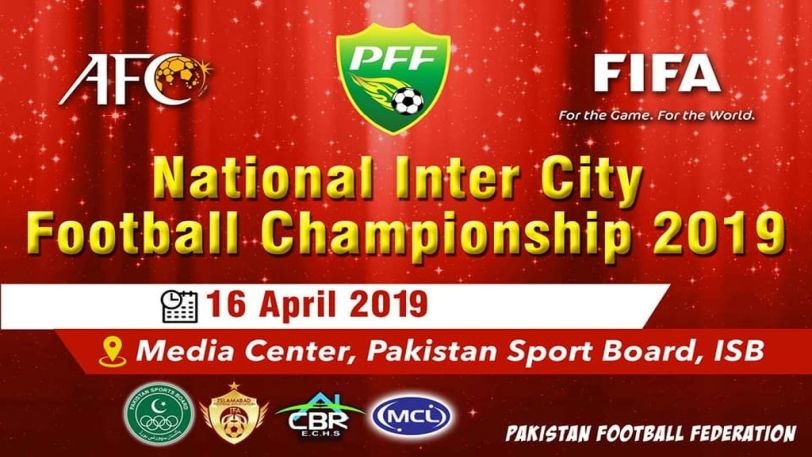 National Inter-City Football Championship was organized by Pakistan Football Federation (PFF) that kick started across Pakistan from 15th April, 2019 aimed to promote football at grass-root level and to find new faces in the game.

As disclosed by Secretary KP Football Association, Basit Kamal, 7 teams from Khyber Pakhtunkhwa, 6 teams from Balochistan, Sindh and Punjab each while 2 teams from recently merged tribal districts and 1 team each from Gilgit-Baltistan, Azad Jammu and Kashmir and Islamabad initially played in their respective cities from 15 to 20 April before 2 teams each from Khyber Pakhtunkhwa, Punjab, Sindh, Balochistan, merger tribal districts and 1 team each from Gilgit-Baltistan, Azad Jammu and Kashmir and Islamabad qualified for the final round of the league which was played at Jinnah Sports Complex in Islamabad from 22nd April to 3rd May, 2019.
Khyber Pakhtunkhwa was divided in 7 different regions and each region had its own team. Peshawar players from Nowshera and Charsadda also took part in the trials, likewise in Mardan players from Swabi and Buner, in Malakand players from Upper Dir, Lower Dir, Swat and Chitral, in Hazara, players from Haripur, Abbottabad, and Manshera, in Kohat players from Hanu, in Bannu players from Lakki Marwat, and in Dera Ismail Khan players from Tank were all considered eligible to participate in the trials.
Furthermore, Khyber Pakhtunkhwa was divided in 2 groups for the Inter-City clash with group-A comprised of Kohat, Bannu and Dera Ismail Khan and group-B included: Peshawar, Mardan, Malakand and Hazara and among them 2 teams qualified for the final round of the league.
Similarly 2 teams from Punjab, Sindh, Balochistan, Sindh, Khyber Pakhtukhwa, merger tribal district and 1 team each from Islamabad, Gilgit-Baltistan and Azad Jammu and Kashmir played the final round of the league.
National Inter-City Football Championship had all the matches played in different cities across the country, including Islamabad, Rawalpindi, Sialkot, Muzaffarabad, Gilgit-Baltistan, Peshawar, Dera Ismail Khan, Karachi, Hyderabad, Quetta and Mastung.
This championship offered an attractive prize money of Rs. 4 Lac for the winner team while the runner-up team got 2 Lac worth of cash pursue. The third position team was warded with Rs 1.5 Lac.
Islamabad team now stands as the title winners of PFF National Inter-City Football Championship 2019. While Peshawar took the runner-up spot and the third position was claimed by Quetta team. Each of the teams were awarded with Rupees 400,000, 250,000 and 150,000 with respective to their position holdings.