The three-day Shandur Polo Festival 2019 ended at Shandur Pass in Khyber Pakhtunkhwa’s Chitral District on with the victory of Chitral-A. 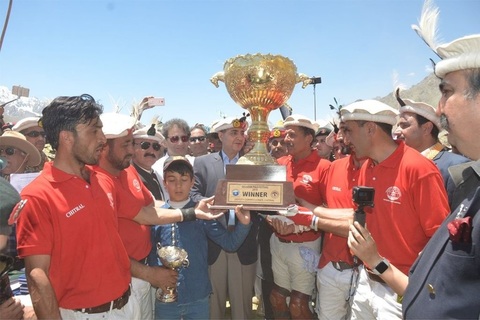 Shandur Polo Festival 2019      Chitral and Gilgit baltistan shadur top near Laspur valley, Chitral line, Khyber Pakhtunkhwa.
The three-day Shandur Polo Festival 2019 concluded successfully at Shandur Pass in Khyber Pakhtunkhwa’s. Shandur Polo festival had a throbbing climax when the Chitral A and Gilgit A teams fought it out neck to neck till the finish when Chitral put the ball through the goalpost in the dying moment of the match to win the Cup by a short head i.e a lead of one goal.
In the first half of the match Chitral team led by five goals against two of Gilgit appearing the clearly stronger side. In the second half however Gilgit came on strong and equaled the score at 5-5. All this time Chitral was mostly on the attacking side but failed to convert many attacks into goals while the Gilgit players did not miss the chances they got.
The Gilgit players showed good stick work and control over the ball. However merit outshone finally when Chitral led by Shahzada Sikander Ul Mulk was rewarded with the winning goal, seconds before the trumpet blew. Izhar Ali stood out as top scorer from Chitral side scoring five out of six goals.
As per the desire of polo fans, choice of the selection committee and general public of Chitral, Shahzada Sikander Ul Mulk was re-instated as captain of Chitral ‘A’ team against Gilgit Baltistan ‘A’ team.
The Shandur Polo Festival 2019 was held from July 7-9, 2019. Hundreds of thousands of local, domestic & foreign tourists witnessed the festival. The Khyber Pakhtunkhwa Minister for Tourism Muhammad Atif Khan said that the provincial government is working to gradually enhance facilities in Shandur to facilitate tourists.
Atif Khan said that the government is committed to promote tourism as an industry. The tourism minister said that the security situation has greatly improved in the Country due to the sacrifices of the security forces and general public, adding that this has helped promote tourism. He said that northern areas of Pakistan are rich in natural beauty.
Teams from Chitral, Gilgit, Laspur and Ghizer participated in the event that has become a permanent feature of the annual sports calendar of Tourism Corporation Khyber Pakhtunkhwa; the corporation has allocated Rs.40 million for the festival.
The sport has now gained international fame with thousands of visitors and tourists from downtown districts and foreign countries thronging Chitral every year to witness the grand gala.