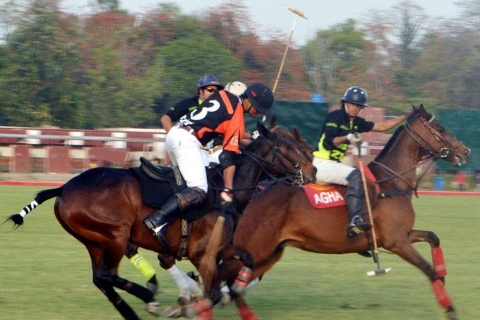 Two-goal handicap advantage helped Magic River beat RIJAS by 7-5 in a thrilling opener of the Faysal Bank Polo Cup 2016 played here at the Lahore Polo Club (LPC) ground on Tuesday.
Hassan Agha was top scorer for the winners as he slammed two goals while Ch Fateh, Alman Jalil Azam and Hassan Abbas contributed one goal apiece for the winning side. Atif Yar Tiwana though hit a hat-trick and played superbly yet his heroics couldn’t save RIJAS from the loss. Irfan Sheikh and Faisal Shahzad also struck once for the losing side.
Magic River were off to flying start as they took 2-0 lead in the first chukker with Hassan Agha and Ch Fateh scoring one goal apiece. RIJAS bounces back in style in the second chukker by hammering three goals – Atif Tiwana produced a brace and Irfan Sheikh struck one – to have 3-2 lead. Alman Jalil pumped in one to level the score 3-3 before the end of the chukker. The third chukker saw only goal from Atif Tiwana to provide RIJAS 4-3 lead.
In the fourth and decisive chukker, Hassan Abbas slammed a field goal to draw the blood at 4-4. Faisal Shahzad then hit a splendid field goal to give RIJAS significant 5-4 lead. When the things were in RIJAS’ control and they were hoping to win the thrilling encounter, high-flying Hassan Agha got the 30-yard spot penalty which he duly converted to level the score at 5-5. No more goal was scored after that and the score after the final whistle was five-all. It was 2-goal handicap advantage, which declared Magic River the winner of the nail-biting clash. Ahmed Khan and Ahmed Nawaz Tiwana officiated the match as field umpires.
In the second match of the day, Olympia/Master Paints edged out Master Paints/Barry’s by 6-5 in the highly-thrilling encounter. The match was draw at 4-4 when the fourth and last chukker was completed and the match entered the sudden death chukker where no team could score a single goal to register victory and the match entered the sixth chukker, where Sufi Farooq hit a field goal to guide Olympia/Master Paints a thrilling win over Master Paints/Barry’s.
Muneeb Monnoo and Abdul Rehman Monnoo scored a brace each for the winners while Mustafa Monnoo and Sufi Farooq contributed one goal each. For the losing side, Agha Murtaza Ali Khan and Sufi Haroon struck two goals each while Agha Musa hit one. Azam Hayat Noon and Saifullah Noon supervised the match as field umpires.