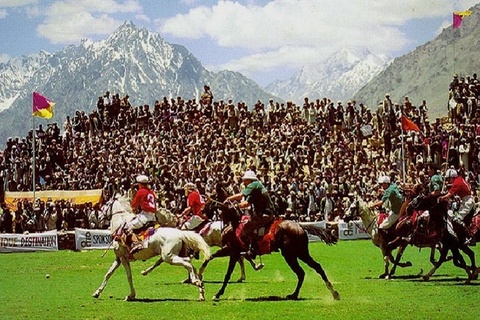 Shandur Polo Festival 2019      Chitral and Gilgit baltistan shadur top near Laspur valley, Chitral line, Khyber Pakhtunkhwa.
A three-day Shandur Polo Festival began in district Chitral. Inspector General Frontier Corps Khyber Pakhtunkhwa Major General Rahat Nasim Khan inaugurated the festival. Speaking on the occasion, he said holding of such a big polo festival in Shandur Valley is a breakthrough reflecting that peace has been restored in the country.
He said arranging of polo festival was a difficult task but the security forces and district administrations have made it possible. The IG FC said Pakistanis have tremendous skills which will be utilized for prosperity and development of the country.
He lauded the efforts of Tourism Department Khyber Pakhtunkhwa, Gilgit Baltistan and district administrations of Chitral for arranging recreational activities in the festival. At the moment, different colorful programmes including Paragliding, foot stalls and traditional dances have also been arranged in the festival.
On the opening day three polo matches were decided where Phander Ghizer produced skillful games and showed great polo as they defeated Laspur Chitral in a tough battle by 8-7 goals.
In the 2nd match of the day Mastuj Chitral didn't allow Yasin Gilgit to score any goal as they overpowered Gilgit by 7-0 goals while in the last match of the day Gilgit D hammered Chitral D by 5-3 goals.
More than twenty thousand tourists have arrived in the area on the first of the festival to enjoy the traditional polo tournament. Shandur Polo ground is situated at a highest level 3800m called as the “Roof of the World” and the King Game has been held annually since 1936.
The polo tournament is featured in the first episode of Himalaya with Michael Palin which have always played the game of polo closest to its original form. In the past, the British Rulers were the patrons of the game. Shandur Pass is one of the major mountain passes between Chitral and Gilgit-Baltistan.
According to the history of Chitral, Shandur is the property of the royal family of Mastuj Chitral, and due to ownership issue the polo was disbanded between Chitral and Gilgit-Baltistan.
Free-styled mountain polo is arguably polo in its purest form. This version of the game played at Shandur-Top has attained legendary status and is of great interest to international and domestic adventure tourists alike. There are no umpires and there are no holds barred.
The festival, being organized by the TCKP and administration of Chitral district, attracts thousands of foreign and domestic tourists, fans of “King of games and game of kings” – polo – to watch the thrilling matches between the teams of Chitral and GB.
The TCKP has made all arrangements to hold the festival in a befitting manner to attract domestic and foreign tourists to the scenic region and traditional game in large number.
Stalls have been established to highlight and promote the artworks of Chitral and Gilgit local artists and skilled people. Rafting in Shandur lake, paragliding, archery, fireworks and kite flying would be other features of the event to attract domestic and foreign tourists in great numbers.
Chitral is the most peaceful region and it attracts thousands of domestic and international tourists annually, especially during the Shandur and Kalash festivals.