All set for Shandur Polo Festival 2019

The three-day Shandur Polo Festival will kick off at the World Highest Polo Ground at Shandur Pass in Chitral from July 7th to 9th. 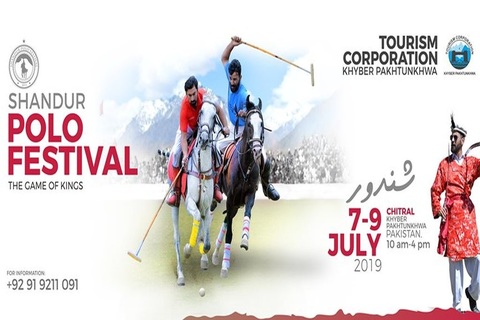 “This year, the number of foreign and domestic tourists will be great as compared to the yester years as complete peace has been restored in the province and the condition of acquiring no objection certificate (NOC) for the international tourists had already been withdrawn,” Kamran said, adding that boarding and lodging facilities to both foreign and domestic tourists would be provided.

He said that a great number of foreign tourists had recently visited Kalash valleys and enjoyed the Chilimjusht festival. He said District Government Chitral, Police, Pakistan Army and other institutions would extend full support to hold the gala at the world’s highest polo ground peacefully.
He said the concerned departments had been issued directives for taking steps for the renovation of polo ground, water supply, transport, holding meetings with stakeholders and provision of other facilities to the participating teams, fans and tourists.
The official said that the Gilgit-Baltistan and Chitral teams would participate in the mega annual event. He said the festival would provide an opportunity of great thrill and enjoyment to the tourists, spectators and fans of the polo game. The secretary said the event would also send a positive message to the outer world that peace had been restored in the region.

“The local artisans and skilled entrepreneurs would be provided opportunity to showcase their products besides polo game, food stalls, traditional music and dances and adventurous activities in the gala,” Kamran Rehman said.

He said rafting in the Shandur Lake, para-gliding, archery and kite-flying would be other features of the event to attract domestic and foreign tourists in great numbers. In addition to setting up camping village, stalls would be established to highlight and promote the artworks of the Chitral and Gilgit local artists and skilled people.
The Tourism Department has already launched a drive for promoting the festival through publicity campaign in print and electronic media and social media as well. The game has got international fame, which is being played at the highest polo ground of the world at Shandur Pass in Chitral.
As Chitral is the most peaceful region, it attracts thousands of domestic and international tourists annually, especially during the Shandur and Kalash festivals. The foreign tourists can now visit the event and other scenic spots in any part of the Khyber Pakhtunkhwa if they just have a tourist visa.