Barry’s through to the main final while Outfitters have qualified for the subsidiary final of ongoing Outfitters-sponsored Lt Gen Shah Rafi Alam Memorial Polo Cup. 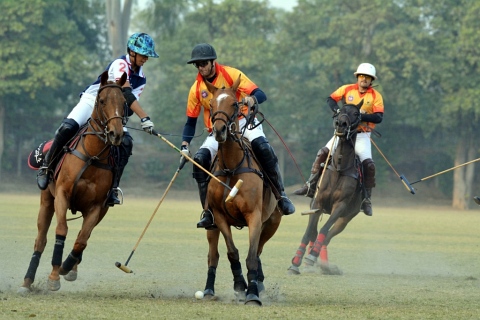 Barry’s cruised Rijas/Green Orchard by 7½-5 and through to the main final of tournament. Combined efforts of Raja Samiullah and Hernan Pieres ousted Rijas as both thwarted a hat-trick each while Raja Mikael Sami added 1 goal. Ahmed Nawaz Tiwana banged in a hat-trick and Geoffredo contributed 2 goals from Rijas but their efforts went in vain.


Ahmed Nawaz struck the first goal from Rijas by converting a 30-yards penalty but Samiullah then hammered a goal to make the score 1-1. Barry’s dominated the second chukker as they fired 3 goals, 2 through Hernan and Mikael added 1 goal and took 4-1 lead over opponents. Hernan once again came up with another goal in the third chukker and made it 5-1. Rijas in their counter attack after regaining form banged in 2 goal through Ahmed Nawaz and Geoffredo to bridge the gap to 5-3.


The fourth and last chukker saw both the teams attacking on each other as Rijas continue their good form and fired another goal to further reduce the lead to 5-4. Raja Samiullah from Barry’s then took charge and hammered a brace to make it 7-4. Rijas once again changed their strategy and slammed another goal to make 7-5 but the effort was too little to beat Barry’s as they have another half a goal handicap advantage which proves the final score in favor of Barry’s by 7 ½ -5.


Earlier, the first match was played between Outfitters and Guard Group and Outfitters after defeating Guard Group seal their seat for subsidiary final by 4-3½. Guard Group had a half goal handicap advantage but they did not cash it in their favor. Shah Shsmyl contributed a brace while Adnan Jalil Azam and Ahmed Ali Tiwana added 1 goal each from Outfitters. Taimur Mawaz Khan banged in 2 goals while Bilal Haye converted a goal.


Guard Group were too confident with the handicap advantage and they struck the first field goal to take advantage through Bilal Haye but that did not lasted long as it was equalized by Adnan Jalil Alam to end the first chukker. Ahmed Ali scored the only goal from Outfitters to take 2-1 lead while Shah Shamyl Alam banged another goal in the third chukker and made it 3-1 in their favor.


Both the teams fought well to earn the lead in the fourth and last chukker and Guard group first score the goal through Hamza Mawaz but Shah Shamyl hammered another goal to further extend their lead 4-2. In the last moments of the match, Hamza Mawaz pumped in his second and team’s last goal to reduce the gap but they still lost the match by 4-3½.