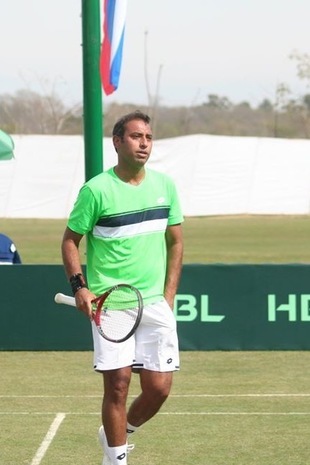 Aqeel Khan is an iconic tennis player who has been amassing a staggering record on the domestic circuit, without getting due acknowledgements for his achievements. Though many Pakistanis have heard of Aqeel Khan because of his Davis Cup prowess, few seem to know about his indelible mark on Pakistan’s local tennis landscape, his struggle to compete in the international arena and about the cruel hand of fate in determining his success as an athlete.
Karachi-born Aqeel Khan is an auspicious tennis player of Pakistan who began playing tennis at the age of 9, whilst attending school in Karachi to avoid doing duties as a ball boy. He began playing junior tennis in 1993 at the Pakistan International Junior Championships.
Despite the potential to move further up the rankings, opportunities have been limited due to a lack of funds, and not enough ITF tournaments being played in Pakistan. It means he has to travel abroad to play matches.
He also holds the record for playing the most ties for Pakistan in the Davis Cup and has the best doubles partnership, with Aisam-ul-Haq Qureshi, for Pakistan.
His younger brother is Jalil Khan, Pakistan number 3 and Davis Cupper. He also has another youth tennis-playing brother called Yasir Khan.
Highest ranking No: 349 (4 October 2004)
Highest rank-doubles: 613.
Prize money: $14,595
Turned pro: 1998
Career record Tour: 9–22
Total: 103–60
Career titles ATP: 0
Challengers: 0
Futures: 7
Email: [email protected]
Plays: right
Birthplace: Karachi, Pakistan
Residence: Karachi, Pakistan
Nationality: Pakistani

2011–2012
Sri Lankan Davis Cup Team – Coach & Hitting Partner
• Hitting Partner to the players on the team
• Provided the relevant levels of coaching and exercise drills to the players
• Helped the Head coach to make the selections for the players for the relevant matches
• Provided the analysis after the matches helping the coach to make the appropriate changes
Apr 2012-Nov 2012
Pakistan Davis Cup Team – Temporary Head Coach/Senior Player
• Provided training to the junior and newly selected players on the Team
• Constructed the appropriate training schedules and implemented them with help from my assistant
• Selected the Players for each match on the tie
• Constructed the analysis and provided to the higher authorities of the Pakistan Tennis Federation after the tie
Aug 2007-July 2011
Modern Club Tennis Academy, Karachi, Pakistan – Head Coach
• Coached all kinds of players
• Organized camps
• Helped the Administrators of the academy, coordinating with potential sponsors to set up tournaments at the Academy
• Conducted practice tournaments
• Travelled with the team abroad