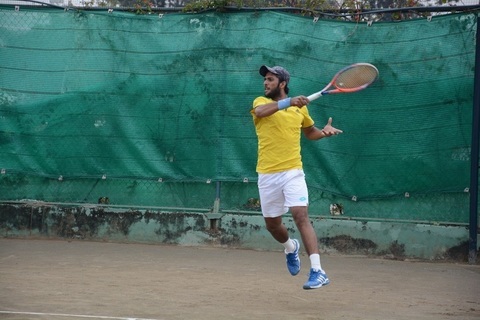 Both the players exhibited quality play in the first set, which featured long rallies. The longer rallies, however, helped Muzammil exhaust Aqeel and further hurt the former national champion with his brilliant forehand winners.
After a close first set which was settled in a tie break,  Muzammil downed Aqeel 7-6 (8-6).
In the second set, the much older Aqeel found it impossible to match youngster’s speed and accuracy and a 6-1 defeat ended his dominance of the national circuit. The final scoreline of the match stood 7-6 (8-6), 6-1.
This was Muzammil’s second win against Aqeel this year after he beat the veteran in Faisalabad in a semi-final early this year.
In the ladies singles final, Mahin Aftab overcame Sara Mehboob 7-6 (7-5), 6-3 to clinch the title.
Earlier, in the Boys’ U-18 final, Mohammad Shoaib Khan defeated Hasheesh Kumar 6-3,6-3. While, Hamid Israr clinched the Boy’s U-14 trophy after beating Mahatir Muhammad 7-5, 6-4.