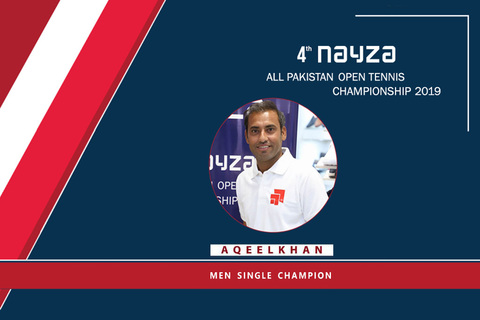 4th Nayza All-Pakistan Open Tennis Championship 2019      Punjab Tennis Academy Bagh-e-Jinnah, Lahore.
The 39-years-old tennis giant Aqeel Khan and ladies singles champion Ushna Suhail sealed the titles of 4th edition of Nayza All Pakistan Open Tennis Championship 2019, which concluded successfully at PLTA courts, Lahore.
In men's single final, Muzammil started the opening set with the fast pace and broke Aqeel Khan's 3rd service game. The resilient Khan was down but clearly not out of the game as he broke back the 6th service game of the match to level the score at 3-3.
Both the players tried to down each other and remained level till 5-5. After that Aqeel Khan showed his class, holding his serve to make it 6-5 and then breaking Muzammil's to win the first set by 7-5.
Aqeel displayed his vast experience in the second set as he held his serve throughout the set and did not allow Muzammil to score easily. The pressure paid off as Muzammil failed to match the intensity of the first set conceding the second set and the match 7-5, 6-1.
Earlier, Lahore-born tennis star Ushna Suhail also had to struggle hard to overcome spirited Sara Mehboob by 6-3, 7-5 to win the women's singles title.

Rashid Malik (ZTBL) and Fayyaz Khan grabbed the men’s 45 plus title after defeating Israr Gul and Asher 7-5, 6-2 while Talha Waheed (Gas & Oil Pakistan Ltd) and Aqeel Khan lifted men’s 35 plus title by beating Shaharyar Salamat and Ali Asad 6-4, 6-2.
The boys U-18 title was won by Hasheesh Kumar, who beat Nalain Abbas 6-3, 6-1. SNGPL’s Hamid Israr beat Bilal Asim 6-1, 6-1 to bag U-14 boys title. The boys U-12 title went to Hamza Roman, who thrashed Husnain Ali Rizwan 4-0, 4-0.
The U-10 title was also won by Hamza Roman, who beat Ameer Mazari 5-3, 0-4, 10-8. The ladies U-14 title went to Labika Durrab, who routed Ashtafalia 4-0, 4-2 while Haniya Minhas grabbed girls U-12 by crushing Labika Durrab 4-0, 4-0. Ibrahim Talha of Leads School won U-6 gold medal and Abdur Rehman (Leads School) bagged bronze medal in U-8.
Rafum Group Chairman Zahid Hussain graced the occasion as chief guest while PLTA Secretary Rashid Malik, Sports Board Punjab (SBP) Vice Chairman Rao Qayyun Zahid, players and their families and tennis lovers were also present on the occasion.
Rashid Malik thanked the sponsors and especially Rafum Group Chairman Zahid Hussain for his generous support towards the game. “Rafum Group has sponsored the biggest prize money event of the year 2019, which is a great step towards the promotion of tennis in the country. The men’s singles winner earned Rs 150,000, runner-up 75,000 while ladies singles winner received Rs 60,000 and runner-up Rs 32,000.”
Aqeel Khan said that he is very impressed with the U-8, U-10 and U-12 players, whom he termed the future Aisams and Aqeel Khans.

Ladies tennis champion Ushna Suhail also lauded the services of Rafum Group towards this game and conducting the biggest prize money event in a successful manner.

“Both PLTA and Rafum Group are contributing well to this game and seeing their services for the game, the future of tennis seems bright in Pakistan.”