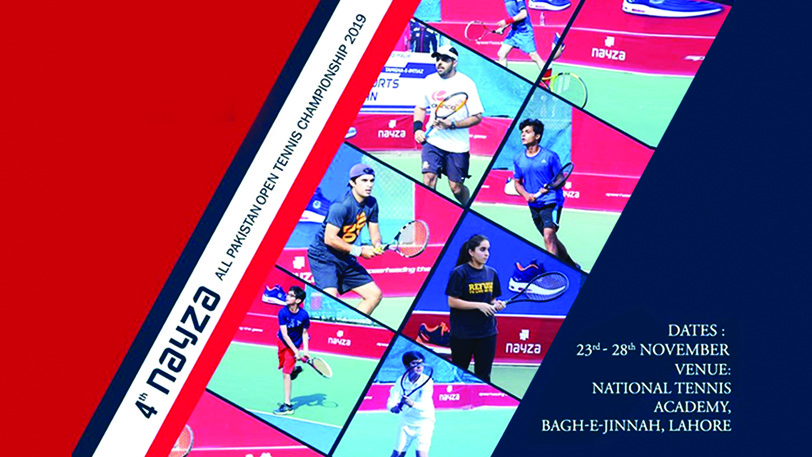 Carried a handsome cash prize of Rs. 8.5 lacs, the Nayza All-Pakistan Open Tennis Championship 2019 was held from 23rd to 28th November at the Punjab Tennis Academy Bagh-e-Jinnah, Lahore.
Pakistan’s foremost tennis players, Aisam-ul-Haq and Aqeel Khan, were both participated in this 6-day tournament. Players were seen in action in these categories: men’s singles, ladies singles, mixed doubles and boys and girls events.
Faheem Siddiqui was nominated as tournament referee.

“The two back-to-back tennis tournaments, the first is already in action, are providing excellent opportunities to our players to prepare themselves for their two international assignments namely Davis Cup (In Kazakhstan) and South Asian Games (In Nepal),” Punjab Lawn Tennis Association (PLTA) Secretary and former Davis Cupper Rashid Malik said.

Rashid thanked Rafum Group CEO Zahid Hussain for organising the biggest prize money tennis tournament of the year which, he said, will certainly prove very fruitful for the betterment of the game in the country.
Rashid further said the PLTA had organized a number of tournaments in last three years with main focus was on the juniors’ lot.
He said the PLTA have the plan to organise tournament in other cities of the province. He disclosed that PLTA had arranged the funds of around Rs 1.2million to meet all the expenditures including the heavy cash prizes for the players.
Nayza Assistant Manager Marketing Malik Nauman said: “Nayza is a brand of Rafum Group, which has a major presence in the fashion footwear and apparel. Rafum Group has been actively promoting sports in Pakistan, especially tennis, and has sponsored events in the past 2015 and Rafum Group is proud to sponsor this event for the fourth consecutive year.”