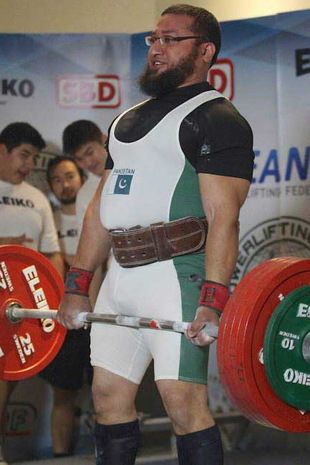 
Ather Butt is not only the top powerlifting athlete from Karachi, but he is also the first Pakistani Powerlifter to create 2 Asian records in RAW Powerlifting.

Ather, Graduated from Aisha Bawany College, Karachi in 1989. Amongst his achievements are medals at the Commonwealth Bench-Press Championships, Asian RAW Championship, and has collected a total of 26 golds to his medal tally at international and national events.

The legendary powerlifter, Ather has been 10 time National Champion of Pakistan.

Ather interview by his own:

"I have always been fascinated by superheroes and their strength,”.

“As a child, I used to hear stories about Hercules and Samson from my grandfather. My grandfather himself enjoyed and even indulged in a bit of bodybuilding and wrestling in his day. Then my father also emphasised on keeping fit. He woke up early in the morning for running or jogging and always encouraged healthy sporting activity.

I was about 15 or 16 when I started bodybuilding, lifting weights to get bigger and stronger. I add that powerlifting was something unheard of at the time, so I went for bodybuilding, though it never could match the joy of fulfilment and achievement which I get from powerlifting. “This was years before the first national powerlifting championship, which took place in Lahore in 1999. And the Pakistan Powerlifting Federation came about only a little time before that.

I have set records and achieved great honours both nationally and internationally in the arena of powerlifting. Yet, I remain a relatively unknown sportsman in Pakistan

I was the only power-lifter from Sindh at the first power-lifting championship in 1999, and while I won there, I created a record too. “At 86kg bodyweight I was doing bench presses for 170kg,”. I have featured in 14 national powerlifting championships between 1999 and 2015, winning and setting new records in all of them. I still have some eight national records to my name, which still stand in two different weight classes (86kg and 93kg), and all three disciplines.

In 2011, I turned international. I featured in the Commonwealth Powerlifting Championship, where I bagged gold in the bench press competition. “Bench press is the most popular discipline of powerlifting, It is so popular that it has its own championships.”

More on the international scene, I also won the Asia/Oceania Championship held in Australia in 2014, while beating Australia’s top and second-biggest powerlifters on their home turf. Then in 2017, in the Commonwealth Bench Press Championship held in South Africa, I won another two gold medals. The four golds in Kazakhstan were only the cherry on top of his long list of achievements. “You may call it my swan song, I am 50 now. I have decided to retire from active competitions now.”

My retiring from competitions doesn’t mean that I have stopped practising. I still train and, with my limited resources, I am also extending training and coaching to others. I have some fine students who are now also competing at the national level and winning too. Powerlifting training is not that simple. We train for five days a week and leave two days to rest and recover from our little injuries, such as pulled muscles here and there.

But we still have a long way to go. Powerlifting is still not a professional sport here. The weights we train with are also not precise. When I went abroad to compete in England for the first time, that was where I saw things such as the belt and knee sleeves. Many of these basic things, which enhance performance, were not even available in Pakistan and we were still winning without them, within our mere resources. I and my trainees now get the belts made from Sialkot, and the other stuff they order online from abroad provided they can afford it.

In countries such as England and Australia, there is support for the athletes from the private sector in the form of sponsors and endorsements. “They are also invited to speak at seminars and give lectures. England and Australia have a great infrastructure in place right from the school, college and university level. Here we don’t even have proper gym facilities. Even though my trip to Kazakhstan was sponsored, I noticed how their government-sponsored training and paid team allowances.

I have been qualified sports trainer who also extends his services for training other trainers at private sports facilities and gyms. “My company Kinetix, in fact, is a consultancy with a team of qualified trainers providing fitness training to the corporate or private sector.

Sometimes, the only one you can rely on to pull your weight is yourself.