Dewa’s Own seals the title of Treet Polo Cup

With the help of 5 goals by Saqib Khan Khakwani, Dewa’s Own won the title and clinches the trophy of Treet Polo cup 2017 played at Lahore Polo Club (LPC). 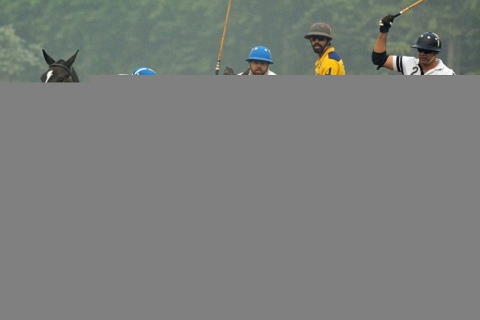 
In the dense foggy circumstances, the final match started with high pace as both the sides attacked each other and succeeded to convert 2 goals each in the earlier part of 1st chukker. Saqib scored a brace in the first chukker from Dewa’s Own while Bilal Noon and Bilal Haye contributed 1 goal each from Remington Polo. In the dying moments of 1st chukker Dewa’s Own hammered 2 more goals to take 4-2 lead.


The second chukker was remained equal between the two sides as both the teams scored 2 goals each. Mumtaz Abbas Naizi with a brace took the lead to 6-2 while Bilal Hayes trucked a brace as well. Dewa’s Own added 2 more goals in the 3rd chukker and dominated the game. One each from Mumtaz and Emran Akhter. Bilal Haye scored another goal from Remington Polo to make the score 8-5. Dewa’s Owen dominated the forth chukker, Saqib Khakwani scored a brace while Mian Mustafa Aziz contributed 1 goal to finish the match on the lead of 11-5.


Before the Main final, in the Subsidiary Final was played between Dawood Group and Terra Energy which was won by Dawood Group by 4½-3. Mohisn Atta Khan Khosa played exceptionally well as he banged in 4 goals from Dawood Group which also had a half goal handicap advantage. Ahmed Bilal Riaz scored a brace while Haris Haroon Malik added 1 to make the score 4½-3 in the subsidiary final.