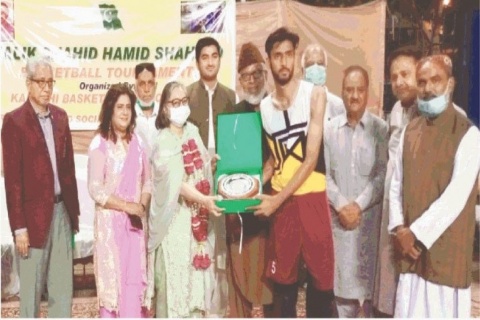 For the winners, Aun Akram scored 17 points and became the star of the day and scored four three-pointers to lead the way. He was well assisted by Zunair Ali (13 pts) and Mohsin Gujjar (12 pts).

For the losing side, the main scorers were Tashquain Zaidi (15 pts), Talal Ahmed (13 pts) and Mohammad Faizan (12 pts).

Aun Akram due to scoring 17 points was declared the best player of the tournament.

The Special awards were given to talented young players Daniyal Marwat and Hasan Ali Jr.

Shahnaz Shahid, the former head of CM Sindh inspection committee graced the ceremony as a chief guest and distributed the prizes among the winners and runner-up teams.