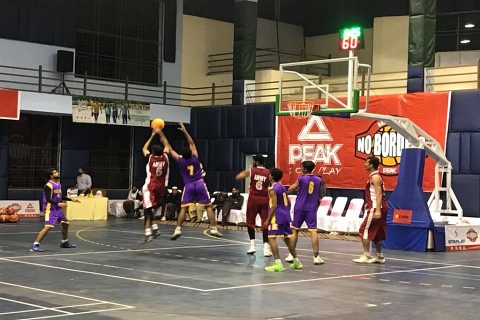 National Basketball Championship 2018      Sports Board Punjab
Pakistan Army performed brilliantly against Pakistan Railways as they defeated railways with a huge margin of 92-28 in the first match. Rashid scored 15 while Saeed and Tughlab scored 14 each for Army. From Railways, Farhan and Raheel scored 6 points each.
In the second match, Lahore Division played extremely well and caved out 94-62 victory against Faisalabad Division. But both thwarted to make their place in the semifinal. After losing first quarter by a big margin, Faisalabad succeeded in drawing the second quarter at 19-19. Particularly, the third game was a real test but again they lost in the third quarter by a big margin. They tried hard to come back in the match in the last quarter but lost by two points. Saad Malik from Lahore was marvelous throughout the match and rescued his team from difficult moments who scored 22 points while Aqib and Zain scored 17 and 13 points each. From Faisalabad Athar, Kashif and Shere scored 12, 11 and 10 points respectively.
The encounter between Peshawar’s sheer and POF was the most thrilling match of the championship because both tried hard to rule the day. But the competition ended at 55-63 in POF’s favour who showed more composure than their opponents. Peshawar won the first quarter with a margin of one point but won the second with a margin of 11 points. However, they failed to maintain their performance in the third and last quarters which they lost by a wide margin. From POF, Arshad scored 21 points. Ijaz and Sajid scored 14 and 10 points respectively. From Peshawar, Wahab scored 18 and Faisal scored 16 points.
In the last match, WAPDA tamed Navy easily 94-37 they made it hard for their opponents to earn points. Amir scored 7 points for the winners while Abid and Bilal scored 16 and 13 points respectively. Arslan and Babar scored 12 points each for Navy.
Match Results:

Semifinals are scheduled to be played between Pakistan Army vs Pakistan and Ordnance Factory WAPDA vs Navy today.