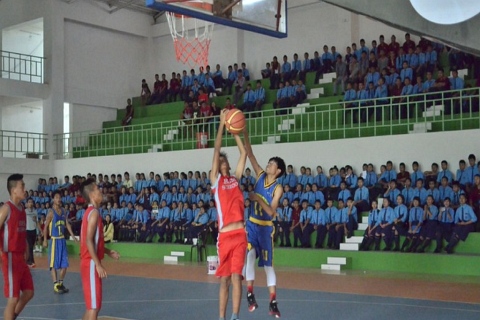 Total twenty-one teams of boys and girls are competing for the top honor. The tournament named on Brig Rashid who was the president of the Pakistan Basketball Federation, Sindh Basketball Association, Sindh Olympic Association and vice-president of the POA played at Arambagh court, Karachi.
In the first thrilling encounter, Nixor College outplayed Beaconhouse North Nazimabad with a huge margin of 64-30. Danish and Zohaib Karim from Nixor College displayed outclass performance while Ajwat and Najam were the main scorers from the losing side with ten and eight points respectively.
In the second match, Bahria College NORE outplayed rivals Bay View College easily by 44-13 points and moved into the semifinal of the tournament. Bahria’s Umer Farooq with 16 and Shehryar with 15 points were top scorers in the game while Sharjeel and Rohail contributed six and four for the losers.
City School PAF Chapter defeated Lyceum School and registered a 24-19 victory. Taimoor Zaheer turned out to be the main scorer for the winners with a tally of 15. He was assisted by Bilal Jamil with five. Taha Younus and Shahpur scored five and four respectively for the losers.
Luckily, Indus Academy moved into the semis by default as their opponents Beaconhouse Johar Campus reached late at the venue.
Today’s fixtures:
Girls semi-finals:
Boys semi-finals: