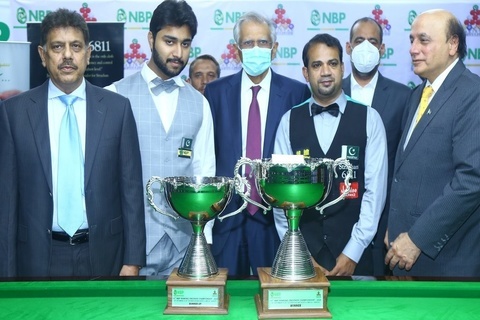 Former national champion, Muhammad Sajjad defeated 20-year-old Haris who entered the contest on wildcard as national U-21 champion, 8-6 in the best of 15 frames final to recapture the title for the third time.

This victory has given him a hop of 10 place from 12th to two in the national ranking.

After shining at the junior level, it was a phenomenal rise for 20-year-old Haris who entered the contest on wildcard as national U-21 champion.

Sajjad received a glittering trophy and a cash prise of Rs100,000 from the National Bank of Pakistan (NBP) President Mr. Arif Usmani while Haris received runner-up trophy and runner-up purse of Rs40,000.

Babar Masih won the cash award of Rs 5,000 for registering the highest break of the tournament (128).