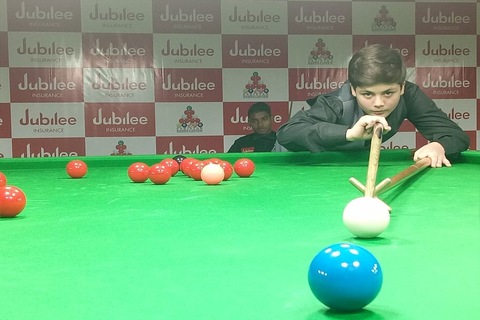 Sixth seed Muhammad Hamza Ilyas from Punjab defeated third seed Kamran Albert Masih of KPK by 4-0 to win the Jubilee Insurance 1st U16 Junior National Championship 2019 at PSB Snooker Hall, Islamabad.
14-years-old Hamza started playing aggressively and made his intentions clear from the first frame itself where he sieged Kamran and leaving no chance for him to recover as Hamza seals the frame by 87-26.
In the second frame, Hamza showed good potting skills and captured the frame by 61-34 to make it 2-0.
Junior Hamza blazed all his guns and placed much good snooker to controlled entire match in his way to routed out Kamran by 61-39 to win the third frame.
Sixth seed Hamza was in brilliant form and exhibited quality potting to score almost from everywhere to win the frame and the match by 4-0 at 55-28.
Muhammad Hamza Ilyas won the title Jubilee Insurance 1st U16 Junior National Championship 2019 with the final score line of 87-26, 61-34, 61-39, 55-28 while Kamran Albert Masih of KPK seals the runner-up spot of the U-16 Championship.
By winning this championship, Hamza Ilyas, an 8th class student of School of International Studies in Science & Arts (SISA), Lahore, became first ever national under-16 champion and also received cash award of Rs 50,000.
Kamran Albert Masih bagged Rs 25,000 for being the runners up. The semi-finalists were awarded Rs 15000 each while quarterfinalists got Rs 5,000 each.
Meanwhile, the Jubilee Insurance National Junior U-18 Snooker Championship will start from January 10 at the venue. The players will report Naveed Kapadia, Technical Director, Pakistan Billiards & Snooker Association (PBSA) today (Wednesday) at Pakistan Sports Complex, Islamabad.