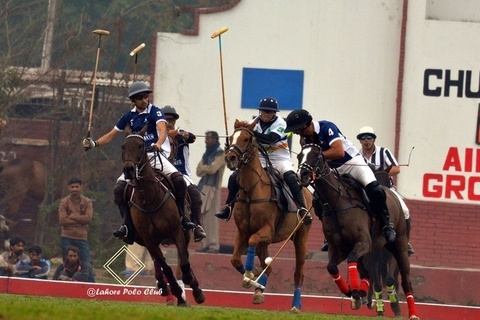 A fine team work was witnessed from The PBG Risala as Hamza Mawaz Khan, Raheem Saqib and Raja Mikael Sami contributed with a brace each while Nicholas A Recaite converted one goal. From ASC, Maj Adil Rao banged in a brace while Mumtaz Abbas Niazi and Shahzad scored one goal apiece.

The PBG Risala maintained their supremacy right from the word go as they thrashed in three back-to-back goals - one each by Raheem Saqib, Nicholas A Recaite and Hamza Mawaz (all field goals) - to gain a good 3-0 edge. PBG continued their dominance in the second chukker as well as they banged in two more goals in the chukker - one each by Raheem Saqib and Raja Mikael - to enhance their lead to 5-0 while Maj Adil opened the account of ASC by firing in a field goal to make it 5-1.

The only goal of the third chukker came from ASC, when Maj Adil slammed in another field goal to further reduce the margin to 5-2.

PBG Risala fought back well in the fourth chukker and banged in a brace - Hamza Mawaz and Raja Mikael - to stretch their lead to 7-2 while Shahzad converted one for ASC to make it 7-3. In the fifth and last chukker, Mumtaz Abbas Niazi fired in an only field goal for ASC to finish the match at 7-4, declaring PBG Risala winners of the match.