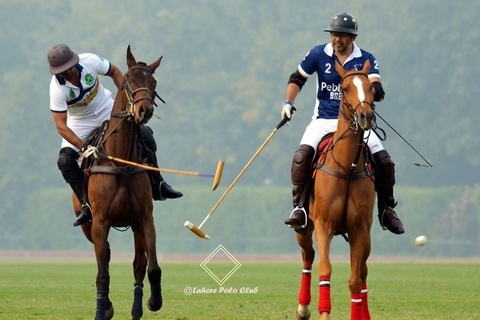 Zameen National Open Polo Championship 2020      Lahore Polo Club
The PBG Risala and ASC Polo Team carved out comfortable victories in the Zameen National Open Polo Championship for Quaid-e-Azam Gold Cup 2020 matches played at Lahore Polo Club ground on Friday.
In the first match of the day, The PBG Risala thrashed Remount by 14-4. Raja Mikael Sami was in sublime form as he fired in fantastic five goals while Nicholas A Recaite and Hamza Mawaz Khan cracked a quartet each and Lt Col Rabnawaz Tiwana contributed one. From Remounts, Julio Alberto hammered a hat-trick and N/R M Akhtar scored one goal.
Remounts though scored the opening goal through Julio to gain 1-0 lead but PBG bounced back strongly and thrashed in three back-to-back goals - two by Nicholas and one Hamza - to have 3-1 lead. PBG maintained their supremacy in the second chukker as well as they added four more goals in their tally - three by Mikael and one by Lt Col Rabnawaz - to stretch their lead to 7-1 while Remounts converted one through Julio to reduce the margin to 7-2.
The third chukker was fully dominated by PBG as they converted a quartet - two by Nicholas and one each by Mikael and Hamza - to strengthen their lead to 11-2. In the fourth chukker, both the sides played equally well but could add one goal each tally, making it 12-3. Remounts struck one in the beginning of fifth and last chukker to reduce the deficit 12-4 but it was all that they could get from the match as PBG thrashed in two more goals - one each by Mikael and Hamza - to win the match by a big margin of 14-4.
In the second match of the day, ASC outlasted Pebble Breaker by 9-5. From ASC, Mumtaz Abbas Niazi and Raja Samiullah hammered a hat-trick each while Eulogio Celestino banged in a brace and Col Tauseef hit one. From Pebble Breaker, Juan Cruz Losada fired in four goals while Bilal Haye converted one.
The first chukker was evenly poised as both the sides scored one goal each to make it 1-all. Mumtaz slammed in one for ASC while Losada converted one for Pebble Breaker. ASC played comparatively better polo in the second chukker as they thrashed in three goals - two by Raja Sami and one by Col Tauseef - while Pebble Breaker struck two goals both by Losada as the by the end of the second chukker, ASC were enjoying a slight 4-3 lead.
Pebble Breaker converted the only goal of the third chukker through Losada to level the score at 4-all. ASC then made a strong comeback and cracked consecutive four goals - two by Mumtaz Abbas and one each by Raja Sami and Eulogio Celestino - to gain a healthy 8-4 lead. In the fifth and last chukker, both the sides scored one goal each as Bilal converted one for Pebble Breaker and Eulogio Celestino one for ASC, who won the encounter by 9-5.