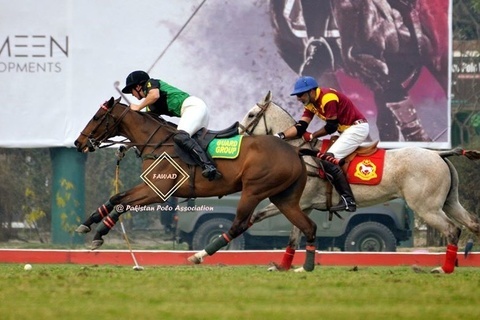 Raja Temur Nadeem emerged as star of the day by firing in fabulous five goals from the winning side, while he was ably assisted by Taimur Ali Malik, who hammered a hat-trick of goals while Daniyal Shaikh and George Meyrick contributed with one goal each. From Remounts, Maj Haseeb Minhas scored a quartet while Lt Col Zulfiqar Ali, Lt Col Tabassum and Julio Alberto converted one goal apiece.

Guard Group/Artema Medical were off to a flying start as they thrashed in two back-to-back goals to gain a 2-0 lead in the first chukker. Raja Temur Nadeem was the scorer as he slammed in two back-to-back goals. The only goal of the second chukker was converted by Julio Alberto, which helped Remounts reduce the margin to 2-1.
The highly-charged third chukker saw both the teams matching fire-with-fire and after a tough battle, Guard Group succeeded in thrashing three goals against two goals by Remounts. Taimur Ali Malik struck twice for Guard Group and Daniyal Shaikh scored one while Lt Col Zulfiqar and Maj Haseeb Minhas malletod one goal apiece for Remounts as Guard Group were enjoying 5-3 lead by the end of the third chukker.
The fourth chukker was identical to the third one, where both the sides displayed high-quality polo skills and techniques and after a tough fight, Guard Group succeeded in smashing in a hat-trick of goals while Remounts banged in a brace. This time, Taimur Ali Malik, George Meyrick and Raja Temur Nadeem contributed with one goal apiece for Guard Group while Lt Col Tabassum and Maj Haseeb Minhas cracked one goal each for Remounts as the fourth chukker ended with Guard Group having a 8-5 lead.
The fifth and last chukker of the match was evenly poised as both the teams played equally well and converted two goals each. From Guard Group, the contribution came from Raja Temur Nadeem, who banged in a brace while Maj Haseeb Minhas also smashed in a brace for Remounts. In the end, Guard Group emerged as winners by 10-7. Nicholas Scortichini and Martin Fewster officiated the match as field umpires while Nicholas A Recaite was match referee.