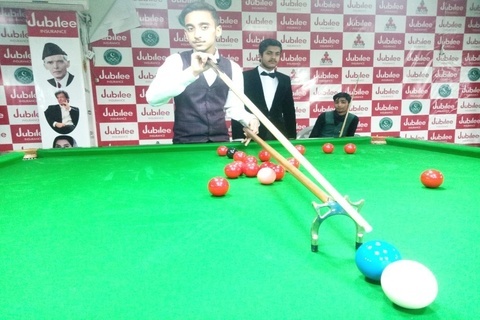 The one sided final of the successfully concluded Jubilee Insurance 2nd U16 National Championship 2020 was seen between Ahsan Ramzan and Zubair Tahir at the Pakistan Sports Complex’s snooker hall, Islamabad.

The 1 hour 38 minute match had seen every single thing in the game whether it’s about potting, planting snooker, the safety, everything was summed up in this match.

The 14-year-old Ahsan, a class VIII student from Lahore, outplayed Punjab's promising cueist Zubair who earlier secured an upset victory by toppling the defending champion Hamza Illyas convincingly in the quarterfinal by 4-2.

Ahsan, who earlier toppled National Champion Mohammad Bilal in Ranking Snooker Championship 2019's penultimate day of league matches, was in superb form as he didn’t allowed Zubair to win a single frame and ruled the day by a stunning 4-0 frames victory which consisted of best of seven frames.