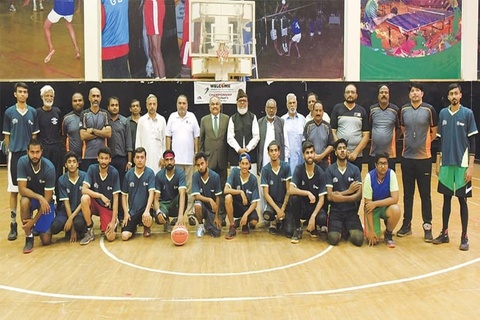 Inter-Division Basketball Championship quarter final match was played between Karachi and FATA teams in which Karachi Basketball Club boys booked their place in the semi-final stage by defeating the opponent team by 71-53. Sana Ahmad and Tahir Naqash earning 24 and 21 points respectively. Haris Khan and Hamza Khan scored 16 and 14 points respectively for Fata.

Both the teams charged themselves at the basket, performing with remarkable foot-work making full effort to secure the win however, the winning team player’s accuracy was too much for the losing team to catch up to as Sana Ahmad  proved to be the most talented player shooting 24 points into the basket. Whereas Tahir Naqash, Haris Khan and Hamza Khan made 21, 16 and 14 shots each, which earned their team a place in the semi-final stage of the championship.

Rawalpindi also made it to semi-finals as the team finished the game in their favor as a one-sided affair of 71-25 against Mirpurkhas. Another successful team is Mardan that won over Kohat by 81-39 as the final score line.

While the matches played into the Inter-Department Basketball Championship witnessed Army and WAPDA teams earning victories over their opponents: POF Wah and Railways, respectively. The players of the winning teams displayed splendid game and gained the victory with great team-work.

Their Ammar Tughlab proved to be the key player scoring a total of 28 points claiming the win along with  Rashid's contribution of 24 successful shots while WAPDA's winning credit goes to the star players : Aqib Javed and Azhar Lala, who each scored 18 and 19 points.
Federal Secretary Ministry of Communication Shoaib Ahmad Sididiqui was guest of honor along with Karachi Basketball Association (KBBA) President, Ghulam Mohammad Khan who witnessed these matches.