Punjab, Baluchistan and Railways stands at the top three spots in 2018 National Triathlon Championship which was held at Punjab Stadium and State of the Art Punjab Swimming Complex pool in Lahore. 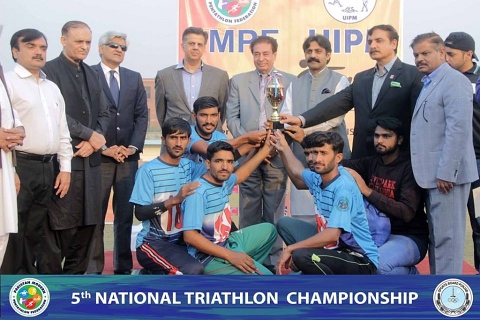 5th National Triathlon Championship      Punjab Stadium and State of the Art Punjab Swimming Complex pool.
The 5th National Triathlon Championship was organized under the supervision of Pakistan Modern Pentathlon Federation (PMPF) in collaboration with Sports Board Punjab which rolled into action from 6th to 8th November.
Players from all over Pakistan belonging to different provinces and departments participated in this event so as to get their hands on the top honors in the championship.
Punjab, Baluchistan and Railways stand at the top three spots in the championship respectively. Punjab accomplished this win as it stands at the 1st position with 6499 points followed by Runner up position that went to Baluchistan whose players gathered 6380 points. Pakistan Railways bagged the third position title by accumulating 5740 points.
Also, Azlan Khan, who scored 907 points, was declared the best player of the championship.
Rai Taimoor Khan Bhatti, Punjab Sports Minister was the reputable chief guest o the final day of the championship who distributed prizes to the high achievers.
Punjab Sports Minister on this occasion said this kind of championships will help a lot in flourishing talent in the games like swimming, shooting and running simultaneously. “Punjab government, under the vision of Prime Minister Imran Khan, will take every possible measure to establish top level sports infrastructure in the province,” he added.
A total of 8 teams took part in this championship which are namely stated below:
1. Punjab
2. Sindh
3. Balochistan
4. Khyber Pakhtunkhwa
5. Islamabad
6. Railways
7. Police and
8. Navy