Punjab wrapped up the second Quaid-e-Azam interprovincial games 2017 with an aggregate 151 medals including 74 gold, 46 silver and 31 bronze medals. 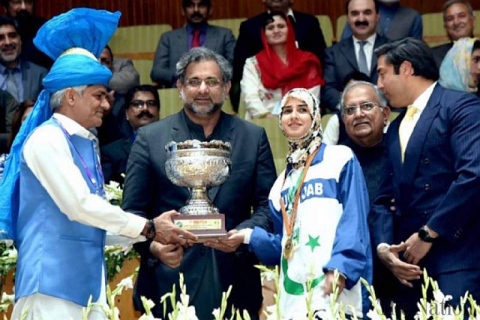 Punjab wins the second Quaid e Azam games with a massive 151 medals while Balochistan secured the second position and surprised all with its efforts with 26 gold, 22 silvers and 38 bronze and total of 86 medals followed by KPK who ended on third with 94 medals including 21 gold, 24 silver and 49 bronze medals.

PM at the end of games while speaking to the closing ceremony appreciated the efforts of all the players and congratulated the winning teams. He added that through games we sent a clear message to international community that Pakistani’s are peace loving nation and is completely safe to host international events. On the occasion, he also announced PM challenge cup football tournament to be played in Islamabad in next three months.
Mian Riaz Pirzada in his address welcomed the PM Abbasi and appreciated the administration of Pakistan Sports Board for conducting the games in such a great manner. He said about 37000 athletes and officials participated in the games and the aim of these games was to promote the soft image of Pakistan and peace and harmony among the people and provinces.