Punjab on top in Quaid-e-Azam games

Punjab added 24 more golds to remain on the top of medals table on the day 4 of Quaid-e-Azam interprovincial games at Pakistan Sports Complex, Islamabad. 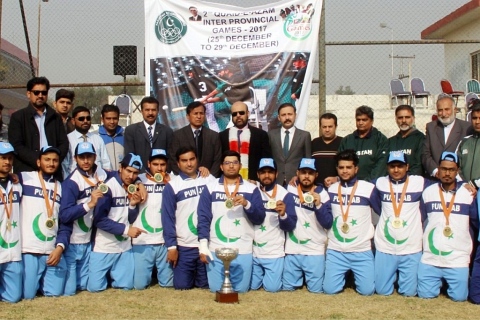 Punjab clinched another 24 gold, 13 silver and 10 bronze as the aggregate extended to 138 including 74 gold, 40 silver and 24 bronze medals followed by KPK and Balochistan with 62 medals each to their name.


In the 4x400 meters rally, Sindh’s Umar Sadat grabbed the gold for covering the distance in 48.52 seconds while Aneela Gulzar from Punjab secures the gold in women event as she covered the distance in 1.39 seconds. FATA and GB athletes dominated the events of taekwondo where both the teams won 4 each golds. Malika Ali from GB won gold in 62kg limelight while Mehwish Karaim won the gold in 67kg, Lunba won 73kg and Manisha Ali won the gold in 73 plus weight category.


Balochistan beats Punjab in the thrilling football final, won the gold in Men’s event while Punjab grabbed the women football gold medal after defeating Islamabad on penalty shoots by 4-2.