Punjab sweeps the Men’s wrestling event as they won all 8 golds on the third day of second Quaid-e-Azam interprovincial games at Pakistan Sports Complex, Islamabad. 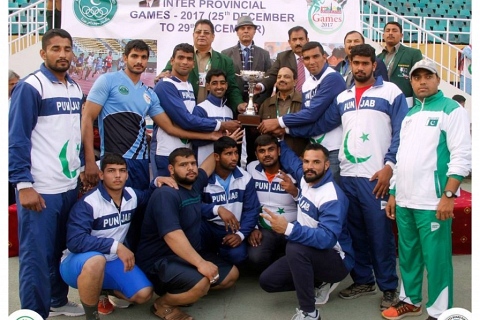 
The complete dominance from Punjab wrestlers was seen on the third day of games as Faiz-ul-Hassan in 57kg, Mohsin Ali in -61kg, Mohammad Ammad in -65kg, Hasan in -74kg, Mahmood in -86kg, Nauman in -97kg and Muhammad in +125kg secured the gold medals. In the wrestling competitions, Islamabad claimed the second spot with 4 silver 3 bronze while KPK ended on third as they won 3 silver and 3 bronze.


Sindh’s Abdul Moeed and Punjab’s Turab Zahra successfully defended their Men’s and Women’s 200m titles on the track of Jinnah Stadium. He also defended the 100m and won the gold by completing a double in this edition as well as he won the 200m race in 21.82 seconds ahead of team-mate Umer Saadat (22.18) and Khyber Pakhtunkhwa’s Shoaib Mahfooz (22.43).
Turab Zahra finishes in 28.00 sec in 200 meters race and secured one of three golds for Punjab while Aneela’s time of two minutes and 26 seconds saw her win the women’s 800m while they were also victorious in the women’s 4x400m relay.


Punjab also dominating the football and netball events in both men and women categories as its teams reaches in the finals of two events.
In Men’s football semifinal, Punjab outsmarted KPK 1-0 while Balochistan ousted defending champions Islamabad 3-1. Punjab women team thrashed KPK women’s in the semifinal by 7-0 while Islamabad outplayed Sindh by 3-1 to seal the final berth against Punjab.


Both the Netball finals will see Punjab competing with Sindh for the gold. In Men’s semifinal Sindh outclassed KPK 24-20 while Punjab slammed Balochistan to reach in the final. In women’s event, Sindh outsmarted KPK 14-7 while Punjab cruises Islamabad 24-7.


Punjab won another gold as they outplayed Islamabad 2-0 in the final of women’s tennis team event. Sindh cruises Punjab in the semifinals of women’s singles and it will be All-Sindh final as Zoha and Hania defeated Shimza and Maha from Punjab.


Punjab also reaches into the final of Kabbadi event as they defeated Sindh by 35-11 and they will face KPK in the final who got walkover against FATA in semis.