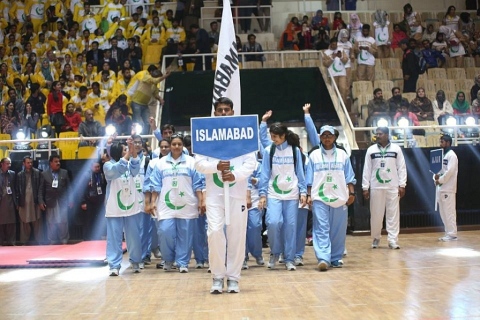 5 day long Quaid e Azam inter-provincial games started today and athletes from all over Pakistan are participating in the event. About 3700 athletes are taking part in the mage event from KPK, Punjab, Sindh, Balochistan, Islamabad, Gilgit-Baltistan and FATA in 19 different sports disciplines to win 578 medals.

Last year athletes participated in 13 different games but this year the number has increased to 19 disciplines. 395 players each are part of Punjab and Sindh contingent while 349 from Khyber Pakhtunkhwa, 393 from Gilgit-Baltistan, 395 from Balochistan, 330 from FATA and 268 are taking part from 268. The home team, Islamabad, has 395 players and officials.


Leader of the house in senate, Raja Zafarul Haq was the chief guest at the opening ceremony. Federal Inter-Provincial Coordination (IPC) Minister Riaz Hussain Pirzada, Director General Pakistan Sports Board (PSB) Dr Akhtar Nawaz Ganjera, Secretary Sports Punjab Muhammad Aamir Jan and other top officials were also present during the grand opening ceremony.. Country’s renowned singers and artists performed in the ceremony. Stringent security measures have taken for the safety of players, while athletes would also be provided food and accommodation of high standard during the games.


Following is the detail of events and their venues: