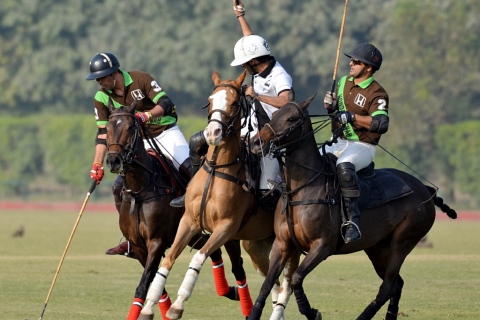 In the first encounter of the day, Honda Chenab proved too hot for Elan as they thrashed the opponents by 11-6. Both the teams offered outstanding show of Polo but it was Honda Chenab the best between the two teams. Elan started the game with good pace and grabbed the game for first 2 chakkers but Honda Chenab strongly came back into game, not only dominated the game but also remains victorious.


Bilal Haye continues his heroic as he slammed a hat-trick and overall 5 goals while Ahmed Ali Tiwana scored a quartet and Ghulam Mustafa Monnoo added a brace. Bilal Hayat Noon and Saqib Khan Khakwani hammered hat-tricks from Elan but not good enough to win the game.


The second match of the day was played between Guard Group and United Snacks and the thrilling encounter started with half goal handicap advantage for Guard Group and that was the decider between the two teams. Gurad Group converted 3 goals in the 1st chakker and took a lead against the opponents but United Snacks came back in 2nd and 3rd chakkers and takes lead against Guard group. The last chakker was dominated by the good game of Guard group. They added 3 more goals and the half goal handicap helped them to win the game by 6 1/2-6.


Ahmed Nawaz Tiwana pumped in five goals for the winning side while Taimur Ali Malik struck the match winner. From the losing side, Hissam Ali Hyder struck all the six goals.


Today (Wednesday), Dawood Group, Black Horse Paints/Artema Medical and Sakuf will play against each other under American system at 1:30pm while Diamond Paints will take on Newage in the second match of the day at 3:00 pm.