Honda Chenab cleared its ways for main final as they routed Dawood Group by 5-3 in the Winter Polo Club at Lahore Polo Club ground while Dawood Group earned place to for subsidiary final. 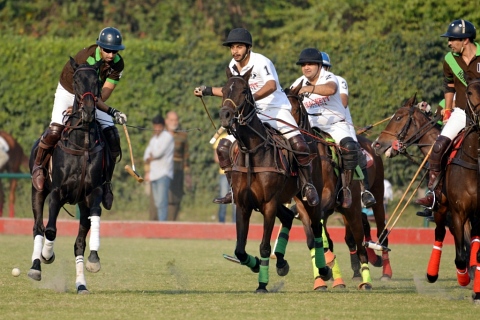 Winter Polo Cup      Lahore Polo Club ground
Bilal Haye and Ghulam Mustafa Monnoo emerged as joint heroes from Honda Chenab Motors as both scored 2 goals each while Ahmed Ali Tiwana added 1 goal. From Dawood group, Mumtaz Abbas Niazi added a brace while Raja Arslan Najeeb contributed 1 goal.
In the all-important match, both teams started attacking on each other’s goal post from the start of the game but in the 1st chukker both the teams added 1 goal each. The second chukker was identical to the first chukker as once again, one goal apiece was pumped in by both the sides to make it 2-2. Honda Chenab Motors then increased the pace of the game and converted 2 more goals while Dawood Group added 1.
The 3rd chukker belongs to Honda Chenab as they took the lead by 4-3. Both the teams once again fought well and utilized all their skills to score goals but it was Bilal Haye who converted a 60-yarder successfully to help Honda Chenab win the event 5-3.
Lahore Polo Club president Irfan Ali Hyder, executive committee members Omar Niazi, Saqib Khan Khakwani, Secretary Col (r) Shoaib Aftab, members and their families and polo lovers were also present on the occasion and witnessed the well-contested match. The main and subsidiary finals will be played on Sunday.