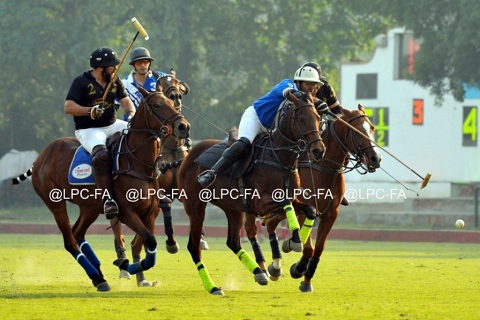 In a tough battle of nerves, Artema Medical/Black Horse paints and Porsche ended the match on 5-5 but the 2 goals handicap was too good for Artema Medical as they won the thrilling match by 7-5 and not only defeated Porsche but also reserve the berth of the final of Winter Polo cup 2017.

Heroic of Hamza Mawaz again came into play as he fired 4 goals for his team while Bilal Riaz Khan added 1 goal. From Porsche, Saqib Khan Khakwani banged in all the five goals but luck didn’t favour his team.


In the other match of the day played between Newage and Diamond Paints, the former emerged as winners by 7-5½. Adnan Jalil Azam was main contributor from the winning the side while Shah Shamyl Alam and Abdul Rehman Monnoo contributed with a brace each. From the losing side, Mir Huzaifa thwarted three goals and Naved Sheikh hit two.


Dawood Group to play against Honda Chenab in the 1st match today at 2:30am. The winning side in the match will qualify for the main final against Arteme Medical/Black Horse Paints while the losing side will take Newage in the subsidiary final.