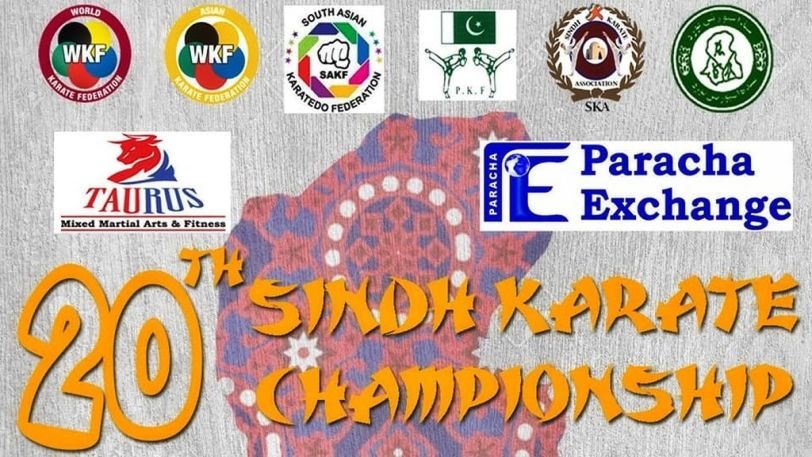 27 April, 2019 - 28 April, 2019
Karachi
Sports Complex, Karachi
Martial Arts
Sindh Karate Association (SKA) with the collaboration of Sports and Youth Affairs Department, Government of Sindh and Taurus MMA and Fitness, Sindh Karate Championship organized the "Sindh Karate Championship" into the current year which marked it's 20th edition.
It was a two-day event which begun its proceedings from 27th April and continued till the next day at Sindh Sports Board, Sports Complex in Karachi.
This championship featured competitions in a total of three events that included: Individual Kata, Team Kata and Individual Kumite. The Individual Kumite event had fights in the weight categories of 40 KG, 45 KG, 50 KG, 55 KG, 60 KG, 67 KG, 75 KG and above 75 KG.
Paracha International Exchange Private Limited hugely sponsored this event and thus stood the title sponsors of this championship. Team composition was of 8 players along with a Manager and rules of World Karate Federation were followed.
Dr. Qurat Ul Ain was the Chairperson of the Organizing Committee of this championship while Sensie Wasif Ali of Taurus MMA & Fitness was the Organizing Secretary. Sensie Abdul Rahim, Ms. Najma Abdul Wahid and Moin Dhedhi were the Event Coordinators.
Among several participating districts and karatikas, Karachi South team with their best of fighters, came out the strongest to stand on the first position by accumulating a total of 170 - most points. Karachi South fighters collected five gold, three silver and a bronze medal to seal this victory for their team.
Sanghar division with two gold, two silver and four bronze medals won the runner-up spot with a total of 100 points and the third position went to Sukkur district with their total of 50 points as their fighters managed to bag one gold and silver each along with a total of three bronze medals.
Benazirabad district stood 4th with accumulating a total of 40 points earned through one gold, one silver and three bronze medals. Larkana division gained the 5th position with one gold and three bronze medals which earned them 40 points. Karachi West team managed to stand on the last spot with 40 points in total through two silver medals.