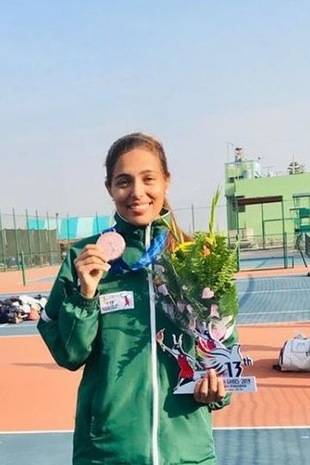 Sarah Mahboob Khan is an Rawalpindi-born leading tennis player since 2005 and represents Pakistan the most in various international tournaments.
She is the talented player to have won Pakistan national titles on clay, hard, and grass, and has won a record number of National Rankings Ladies' Singles Titles. Her father Mahboob is a tennis coach.
In May 2011, she signed to play for the tennis team of the University of New Mexico. After her sophomore year, Khan transferred to play for James Madison University in Virginia, where she played for four years and graduated in May 2015. She then returned to Pakistan.
Plays Right Handed: (Double Handed Backhand)
Turned pro: 2010
Prize money: US$ 687
Singles : Career record 2 - 4
Doubles Career record: 2 - 4