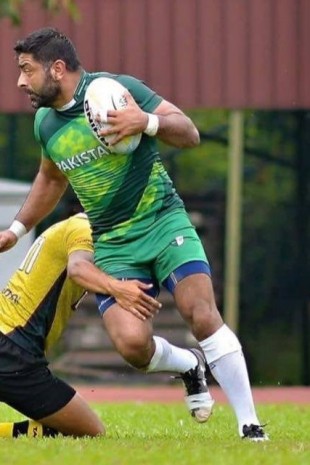 A naturally aggressive player Kashif, belongs to Islamabad, who  started playing in 1997. He played his first 7s in Dubai in 2000 & won his first plate in 2004 as captain. He lead his country in its historic first ever test in Hong Kong, 2004.
Kashif has all the right ingredients required to Lead & Inspire Communication,Motivation, Mental Strength, Decision Making & Sportsmanship these qualities make him one player every one wants in his team & an automatic choice for captaincy because when it comes to selecting the Captain its not about picking the best player in the team but the 'BEST Player for the Role'.
He works on the great saying of our founder the Quaid -i- Azam who use to say "Failure is a word unknown to me".
Member of the first test winning team of Pakistan. The historic victory came against Philippines in 2006 where they went on to defeat Guam as well in the competition. Kashif won the "Player Of The Tournament Award". He went on to represent his country in Tours To Malaysia, Sri Lanka, Thailand & Asain 7s Qatar,2017.
With a career spanning over 2 Decades Kashif is one of the most capped players of the country with the unique distinction of captaining Pakistan in all formats & both Codes of Rugby.
Domestically he lead his Club IRFC to its only National Championship beating the Army in the final of the Servis Premier League Championship 2016. His inspiring performance earned him the "Player Of The Tournament". He has a bag full of Domestic & International Achievements.