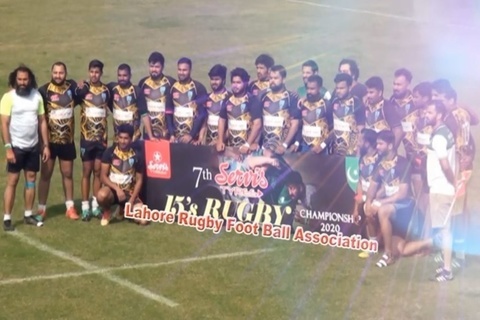 The Division II matches of the 7th Servis Tryes 15-a-side Rugby League were completed in South Punjab, where all the participating clubs took part with great zest and fervor.

Pakistan Rugby Union (PRU) Director Technical Shakeel Ahmed said that Servis Tyres Pakistan Rugby League is one of the most popular rugby events of the country, in which clubs from across Pakistan take part in different divisions.

“For the first time, we have included the teams from Karachi and Baluchistan, besides regular teams from Islamabad, Lahore, Peshawar, Multan, Bahawalpur, Bahawalnagar, Vehari, Dunyapur, Lodhran and Fort Abbas."

PRU Chairman Fawzi Khawaja thanked Servis Industries Director Chaudhry Arif Saeed for sponsoring rugby league for the last seven years. “This 15-a-side rugby has recognition not only in Pakistan but also in entire world. This format is more famous among rugby players and is played more than other formats, its world cup is also conducted by the world rugby body.”

Fawzi further said that the enthralling and exciting matches are being contested in the ServisTyres Pakistan Rugby League, where the teams are performing well and amusing the spectators with their excellent rugby skills.

“The future of Pakistan rugby is quite bright and we are putting our sincere efforts to further flourish this game in Pakistan,” he added.