Arif Saeed and Fawzi Khawaja re-elected president and chairman of Pakistan Rugby Union (PRU) for the next four-year term during its general council meeting held virtually. 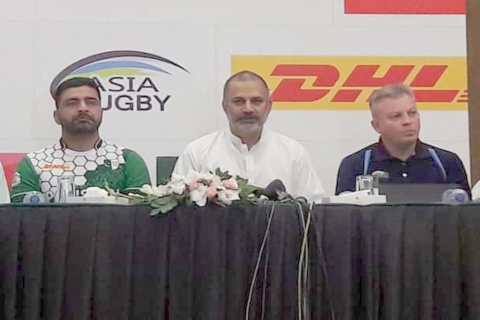 Arif Saeed and Fawzi Khawaja re-elected president and chairman of Pakistan Rugby Union (PRU) for the next four-year term during its general council meeting held virtually on 24th March.

The general council meeting of the Pakistan Rugby Union was held on zoom, where representative of all the affiliated units participated during the online session while POA Deputy Secretary POA Muhammad Jahangir acted as observer throughout the election process.

Addressing the participants, PRU President Arif Saeed said: "Pakistan Rugby Union has been working well at grassroots level for the last few years, which has started yielding fruit as it has helped us a lot in increasing the number of players and coaches to the larger extent. Our work at grassroots level in entire Pakistan has been applauded by World Rugby and Asia Rugby as well. Now rugby is very famous in every corner of the country and its players are increasing rapidly.

"This year, we have started rugby program in Gilgit-Baltistan, which produced very satisfactory results and it attracted a lot of youth, which have started playing it professionally. But due to Covid-19 pandemic, the activities have been stopped and we are looking forward to double our efforts in further popularizing this beautiful game in the entire as soon as the sports activities are resumed in the country. We have also planned to host international rugby events, which will further help in promoting this game in Pakistan," he added.