With throw of 85.16, Pakistan’s Arshad Nadeem qualifies for Javelin Throw final in Olympics 2020

Pakistan’s Arshad Nadeem has qualified for the final of Javelin Throw with a throw of 85.16 in Olympics, which is slated to be held on 7th August. 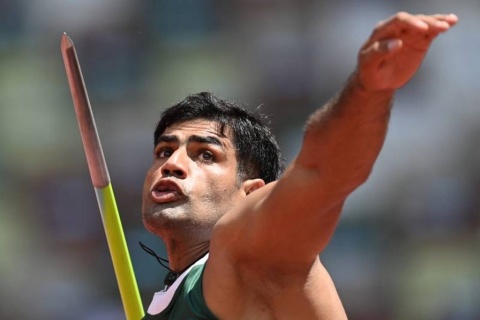 From Mian Channu to Tokyo, Arshad Nadeem created history as became the first-ever Pakistani athlete to qualify for the final of any track and field event in the Olympics.

With a monstrous throw of 85.16, Asian Games 2018 bronze medalist, Arshad Nadeem secured third ranking in Qualifying Round and qualified for the final of Javelin Throw competition in Olympics, now he will compete for Medal on 7th August.
In group B, where the athlete had to throw a minimum of 83.5m to directly qualify for the final. Arshad, who ditched cricket for athletics as a teenager, topped qualification Group B and was one of the 6 throwers who made the automatic qualification mark.
In his first attempt, Arshad could reach the 78.5m mark, but in the second attempt, Arshad created history with a throw of 85.16m that also placed him on top of group B.
#Pakistan #ArshadNadeem #TalentPk #ArshadNadeemJavelinThrower #ArshadNadeemOlympics