Hasham Hadi Khan won the qualifying tournament held in Karachi for the selection of team Pakistan at the WESPA Youth Cup scrabble championship. 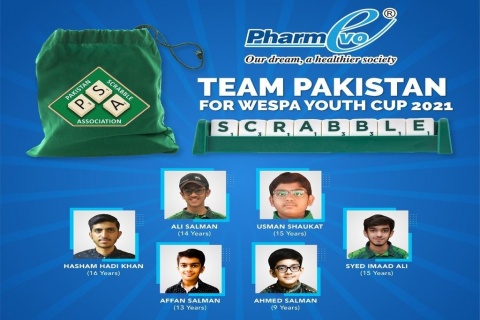 Hasham Hadi Khan won the qualifying tournament held in Karachi for the selection of team Pakistan at the WESPA Youth Cup scrabble championship.

The tournament was held in two stages with over 60 top youth players participating. In the first leg 50 players fought it out for a place in the grand finale. Top ten players from the first leg qualified for the final round where they were joined by ten players that have previously participated in international tournaments.

The final qualifying round was a gruelling 19 game tournament on round robin league basis played over two days.

16 year old "veteran" Hasham Hadi emerged as the only player that remained unbeaten throughout the tournament. Hasham won all his 19 games with an impressive spread of 2288.

The vastly improved Ali Salman wasn't far behind winning 17 games and had a spread of 1441.

Mr. consistent Usman Shaukat finished 3rd with 15 wins and a spread of 1519.

Pakistan's no. 1 youth player and former world youth champion Imaad Ali was visibly rusty after a long layoff from scrabble. Imaad finished 4th with 13 wins and a spread of 1665.

One of the highlights of the tournament was the performance of Salman brothers. Affan Salman was hugely impressive and beat several senior and experienced players to clinch the 5th position and a place in the Pakistan team. No less impressive was the little Ahmed Salman, who at just 9 years of age clinched the six place and qualified for the Pakistan team joining his elder brothers Ali and Affan.

This is the second instance, since the Hadi brothers that the Pakistan team consisted of three brothers.

The WESPA Youth Cup will be played on 7-22 August and managed by Pakistan Scrabble Association.