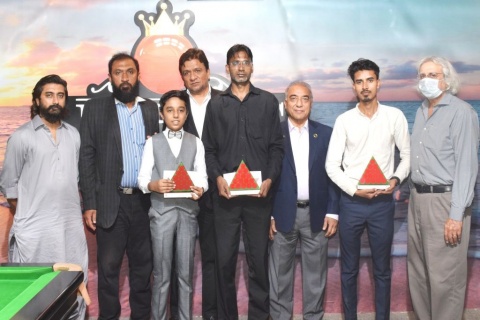 Faizan easily outplayed experienced Sultan by 6-2 in the best-of-11-frame contest.

Faizan Ahmed was awarded with Rs40,000 long with the trophy of Sindh Cup. Sultan received Rs20,000 with the runner-up trophy and Abdul Sattar got Rs5,000 for recording the highest break (111) of the tournament.


Hasnain Akhtar asserted a cash award of Rs12,000 for winning the inaugural Under-17 Sindh Cup while Hanzila Asif got Rs8,000 with the runner-up trophy and another award of Rs2,000 for chalking up the highest break (45) of the tournament.

President of Karachi Chamber of Commerce & Industry (KCCI), Shariq Vohra, graced the ceremony as chief guest and distributed prizes among the winners.