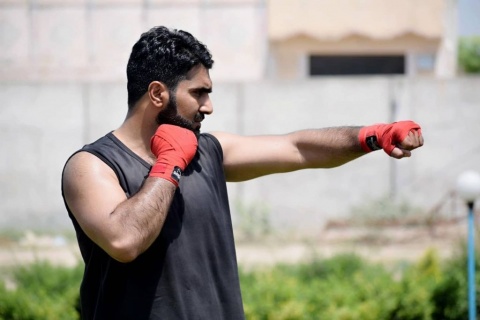 Pakistani martial artist, Irfan Mehsood, has registered his 43rd Guinness World Record by achieving the latest for the most push-ups (one leg raised carrying 100lb pack) in one minute.

The 31-year-old Irfan Martial artist from South Waziristan, Irfan Mehsud added another feather to his cap when he captured his 43rd Guinness World Record by achieving the record of most push-ups (one leg raised carrying 100lb pack) in one minute.

"I broke France's Eric Lejeune's record to achieve the feat. Eric had made 31 in one minute while I did 43," Irfan told to Khilari.

Irfan holds a Masters’ degree in sports sciences and an MS degree in finance. He is a serial fitness record breaker, who has already broken the records of several athletes from India, the USA, Iraq, the UK, Philippines, Italy, and other countries.

Irfan trains between four and five hours daily for every record, he attempts until he feels he can break the one he's aiming for.

Irfan also told to Khilari.pk that one of his main aims through breaking records is to promote his region of Waziristan all while advocating a healthy lifestyle and staying active.

Irfan said that he has set a target to register 50 Guinness World Records. He is working really hard for that and determine to achieve his target in the next few months.