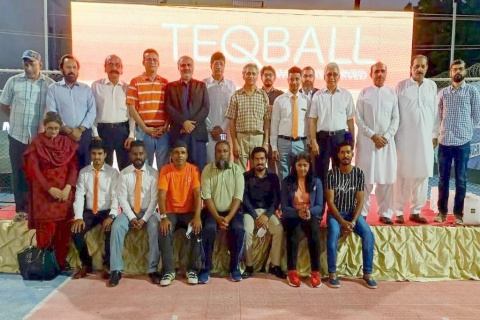 After KPK Teqball is now also introduced in Karachi, (Sindh) as Pakistan Teqball Federation and Sindh Teqball Association organized an inauguration ceremony of Teqball in collaboration with Alpha Education Network.

Recently introduced Teqball game is a new additional Sports in Pakistan. Being played in more than one hundred countries Teqball is also getting fame in Pakistan.


Former Hockey Olympian Sami ullah has stated that in the past time there were only few sports which was being played in schools and colleges, but now the time has changed sports is getting fame and new generation is getting involved in different games and he further request to the government of Pakistan to support this game so that it could be played in the district level through that players can improve their Physical fitness.

Pakistan Teqball federation president Absar Ali told that his aim is to start this game first from the grassroot level.

Nasar ullah sheikh said that it's a new game it should be promoted and should also be introduced in the interior Sindh.

Teqball was firstly introduced in the European country Hungry about nine hundred years ago. Time by time it got spread into the whole world and Teqball is the new additional Sports in the sports world. Teqball World Cup was held in 2017 in France which was won by Romania.