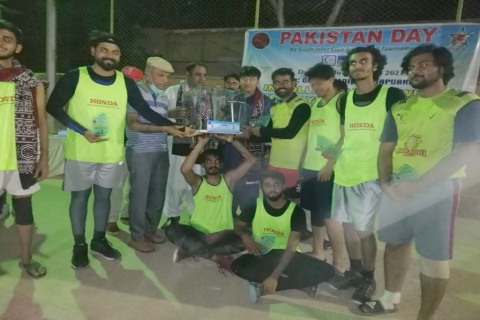 Fighter Basketball Club Mirpur Khas won the final of the three-day All Sindh Inter-Basketball Tournament on the occasion of Pakistan Day by defeating Karachi Bulls Basketball Club Karachi by 78-76 after a thrilling competition.

The three-day tournament was held at the Shaheed Benazir Bhutto Ground (Gamma Stadium) in collaboration with Isa Lab.

The chief guest of the final match was Ajay Govindram, Manager, Tasco Seeds, to whom the President of Division Basketball Association, Retired Major Masroor Baig, presented gifts and flowers of Sindh Culture Ajrak. Were present on the occasion.

There were a large number of spectators to watch this exciting and thrilling basketball match. At the end of the match, special guest Ajay Govindram presented trophies to the winners and runners-up and distributed prizes and shields to all the players.