Neelofar Shiraz, 32, hailing from Khyber Pakhtunkhwa (KP) Battagram district made history when she attempted and successfully broke 1,000 bricks with her hand in just 27 minutes at Islamabad’s multi-purpose sports stadium. 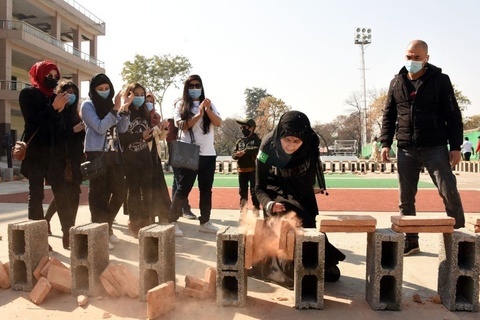 Wearing a black shirt with Pakistan flag emblem on it Neelofar positioned herself to unleash her powers and with the first shout of the Master, she started breaking the bricks.

It took her 27 minutes to complete the number and finally, with the last strike, she broke down the 999th and 1,000th bricks and was cheered by her family members and all those standing close by.

“My mother and members of family, my coach Master Chen, friends and sponsors of the event are all here to support me and their presence is quite reassuring,” said Neelofar.

“We shall send the complete video recording of the event to the Guinness Book team so that they could include her name as the world record holder in the brick breaking category,” he said.

She is currently living in Islamabad. She has done Masters in Chemistry and working as an online teacher.

She started formal training in November 2018 and spends around two hours practicing this art.