Pakistan’s only professional cueist, Hamza Akbar, has been forced to contemplate a return to the country as he does not have enough money to continue playing in UK’s Professional Circuit. 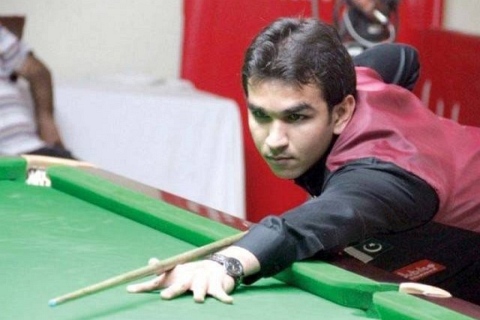 Pakistan’s only professional cueist, Hamza Akbar, has been forced to contemplate a return to the country as he does not have enough money to continue playing in UK’s Professional Circuit.
Akbar and the Pakistan Billiards and Snooker Federation (PBSA) have requested the IPC Sports Ministry and the Pakistan Sports Board (PSB) several times to help him continue playing at the highest level but, apart from false promises, the authorities have not done anything to help him.
The IPC Sports Ministry and the PSB are yet to release the Rs2.5 million that Akbar is owed for winning the Asian Snooker Championship.
Akbar awaits Indian visa
Before Akbar was leaving for the UK at the end of May, the ministry promised he will get his due share but, despite constant reminders from both the player and the PBSA, no funds have been released.
The Faisalabad-born cueist said that if he does not receive the due money from the government soon, he would have to give up on his dream move and quit the Professional Circuit.
“I’ve got no choice but to return to Pakistan in the next few days since I can’t make ends meet, while my contract with the Victoria Snooker Academy has finished as well,” Akbar told The Express Tribune from Oldham. “The Victoria Academy officials were very welcoming and allowed me to keep playing with them for some time. I had hoped that I’ll receive my prize money in the meanwhile so that I can pay them but it never arrived.”
PBSA President Alamgir Sheikh has assured Akbar that if the government does not do anything, then the federation will send some money. “I’m grateful to the PBSA that they have been trying to help me continue playing in the Professional Circuit,” said Akbar. “It’s great to hear that they will somehow arrange some funds to help me. This is the responsibility of the IPC Sports Ministry though and I’m very dejected with their attitude.”
PBSA sends two young cueists to Thailand
Akbar feels he is not being recognised for his historic achievement. “It’s a big achievement to be playing in the Professional Circuit but I think the relevant people in the government back home don’t realise that,” he lamented. “All I can now do is request Prime Minister Nawaz Sharif to look into my case.”
Akbar also said he is still waiting for a visa to play in the Indian Open in India’s Hyderabad, starting from July 5. The 22-year-old added that if the visa does not arrive, then he will use the £1600 he received from winning the qualifier to extend his Professional Circuit stay for another month.