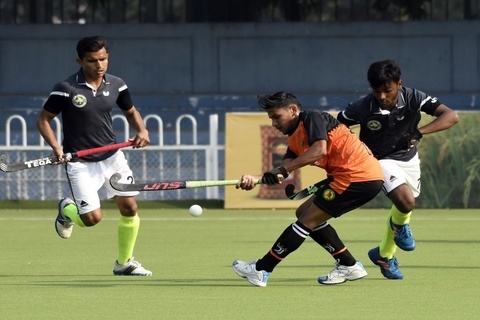 On the opening day of the Hi-Tech Under 17 Hockey Tournament, two well contested matches were played at the National Hockey Stadium. Lahore.

Hamza Fiaz, captain of Fiaz HA, broke the ice in the 36th minute. Aslam Roda HA equalised in the 49th minute through Rehan. When it seemed the match is drifting towards a draw, the Sargodha boys in an attacking spree scored two goals in the last three minutes through Abuzar and Ammad, who was declared Man of Match.

In the second match, the organizers, Dar Hockey Academy, Lahore defeated Tahir Zaman Hockey Academy, Gojra in a 3-2 thriller. Within two minutes of the start of the game, Dar HA went ahead through their brilliant forward Abdul Rahman. Tahir Zaman HA restored parity in the 18th minute via Ammar Rasheed. In the second half, Shahbaz Ahmad of Dar HA struck twice in the 38th and 40th minute to make it 3-1.

The Gojra boys fought back and reduced the margin when Ammar Rasheed got his second in the 58th minute, this time converting a penalty corner. Tahir Zaman HA desperately looked for an equaliser but it remained elusive. Kashif of Dar Academy was named Man of Match.