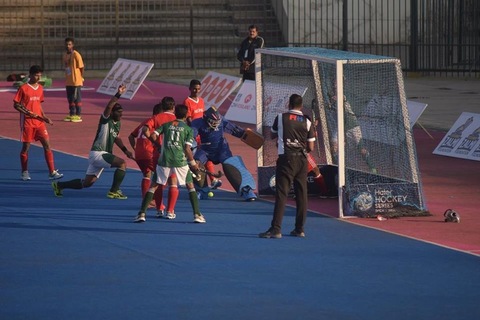 In the opening match of the Haier Hockey Series Open at the National Hockey Stadium, Lahore, Uzbekistan outplayed Afghanistan 11-0 in a completely one sided match. Uzbek side completely dominated against Afghanistan and impressed with their hard work and moves up and down the flank. The winners were quick in attacks and solid in defence and didn’t allow their opponents to challenge their supremacy in the match.

Senior Minister Punjab, Raja Bahsahrat was the chief guest at the opening ceremony of this FIH event. He was accompanied by the President PHF, Brig (rtd) Khalid Sajjad Khokhar and officials of PHF and Punjab Hockey Association.

The second match was played between Pakistan President XI and Nepal where Pakistan team outshone Nepal 9-0 on the opening day in the one-sided affair. The home side added goals at its will against Nepal which lacked basic drills of the game and struggled throughout the match to follow their speedy opponents who were ahead in all departments of the game.

It is pertinent to mention that Pakistan President XI’s is appearing as a guest team. Their matches are all ‘friendly games’ and carry no points towards the actual tournament. It also turned out to be a lop sided contest.