Quick Swish, Bounce made it to the Red Bull Half Court National Finals

Quick Swish and team Bounce booked their tickets to the National Finals of Red Bull Half Court after winning the regional finals in Karachi. 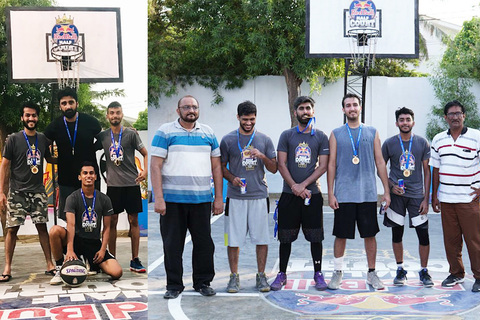 At the Neighborhood Basketball court Clifton, it was an action-packed weekend as Red Bull Half Court came to Pakistan for the first time!

“We are now going to the National finals with the aim of showing our mettle,” Quick Swish’s Ans Azhar, said after his team’s victory.

With two teams from Karachi set to play at the National finals, there were separate knockout tournaments on each day with unstoppable team Bounce securing the other berth after winning the final 11-3 over team Asad, among the 32 talented teams registered from Karachi.

“It’s a great moment for us,” Bounce’s Ammar said. “We knew we had a strong team but the real test of our team will come at the National finals.”

The competition is taking place across Pakistan with next qualifiers in Multan, Lahore, Faisalabad and Islamabad. The winners from each qualifier will participate in the National Final, following which the winner will represent Pakistan at the World Finals in Turkey.