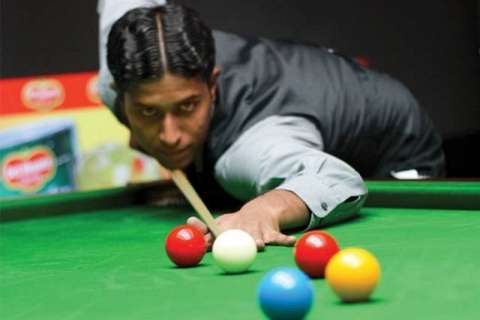 While former IBSF World Championship runner-up Mohammad Sajjad’s presence would be missed at this year’s Asian Team Snooker Championship in Abu Dhabi, his World Team Championship winning teammate Muhammad Asif believes that Sajjad’s replacement, Asjad Iqbal, is a great addition to the team.
Asif was speaking at the training camp set up by the Pakistan Billiards and Snooker Association (PBSA) as the squad geared up for the 4th Asian Team Event and 5th 6-Red Championship, scheduled to take place later this month.
Akbar vows to come back stronger
Sajjad was dropped from the squad following his below-par performances in the Asian Individual Snooker Championship where he was knocked out from the last-32 stage with the PBSA visibly disgruntled by his performance.
The PBSA, who also wanted to send a message that no one is guaranteed a place in the squad, thus named a four-member team to represent Pakistan in the May 18-26 championship which includes former IBSF world champion Asif, Mohammad Bilal, Iqbal and Babar Masih.
Asian Snooker Championship: Asif, Sajjad, Bilal cruise into last 32
And Asif, who will be teaming up with Iqbal in the event, was satisfied with the selection.
“Iqbal is a very good player as he has proven with spectacular performances in domestic international events,” he said. “Obviously, Sajjad will be missed because I won the World Team Championship with him so I have a comfort level with him, but I think Iqbal will be a good replacement.”
PBSA announces team for Abu Dhabi snooker events
Meanwhile, PBSA President Alamgir Sheikh is in Islamabad to meet Sports Minister Riaz Hussain Pirzada for the release of Hamza Akbar’s — Pakistan’s first cueist to feature in the professional tour — prize money of Rs2 million, so the cueist can leave for the second season of the prestigious circuit.