It was chaos all-around in the Quaid-e-Azam Inter-provincial Youth Games, held here at Pakistan Sports Complex on Sunday. 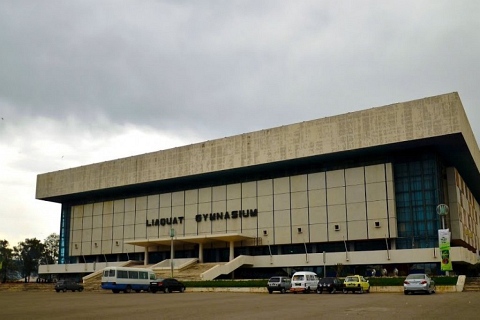 It was a matter of grave concern that the games are being conducted in the name of the founder of Pakistan Qauid-e-Azam Muhammad Ali Jinnah but not a single portrait of the founder of the nation was witnessed in the entire complex.
Only one banner, which was blown away by winds, was considered enough.
On the other hand, large size portraits of Mian Riaz, Nawaz Sharif, Mamnoon Hussain, Ahsan Iqbal, AKhtar Ganjera and PSB union leader were all over the complex.

The PSB also failed to handle the situation as pickpockets were on the rampage and a number of high-profile personalities lost their valuables including DDG Dr Waqar, swimming pool employees and masses.
The security was at the lowest and strangers were given easy path to the venues, which could result in any untoward incident.

Departments and provinces also lodged strong protests against each other over inclusion of over-aged players while Naseer Bunda hockey ground and Jinnah Outer Football Stadiums have turned into battle field as officials of different teams misbehaved with each other.

Islamabad staged strong protest against Balochistan for including professional player in their team and tendered their written protest to organising committee.
They took stance that a departmental player is not eligible to represent provincial team.
In the female football event, KP and Sindh players protest against Gilgit/Baltistan for including professional players and term it a joke with the rules.

The media also faced hardships in performing their duties as the failed to open the media centre.
Only back side of the media centre was opened where internet system is outdated and has only three computers.
Highly unprofessional PSB employees were deputed to prepare results, who are taking hours to compile results.
After receiving complaints, M Shahid, chairman media committee, tried to some extent to resolve the issues.